The Project of Assaleh Mosque was built on an area estimate at 224,831 square meters including roads, gardens, passages and car parks. The mosque is wide enough for 45 thousands worshipers. Its parks could include 1900 cars.

The mosque has six very high minarets with the highest of 80-100 meter, the highest ones in the Middle East, and 23 domes distributed in different parts of the mosque. The greatest dome is 54,5 high with a diameter of 28 meter, its exterior part is covered with substance called L.G.R.C with white and red colors. Inside the dome is adorned with carved verses of the Holy Koran and gypsum adornments.

The mosque includes Assaleh College for Koran and Islamic Sciences in a nearby building linked to the mosque with the same architecture construction of the mosque.

The prayer hall is rectangular with 147,4 meter long and 87, 4 meter width with an area of 12,883 square meter. The roofs of the mosque have two levels, the first one is 21 meter height and the second level is 24 meter. The mosque has 15 doors and 24 windows.

The mosque has 112 giant columns, 68 of them are round ones and located in the middle of the mosque. The diameter of each column is 150 centimeter. There are also 40 wall columns in the form of half circle with radius of 75 centimeter for each. These columns are linked to adorned beads. 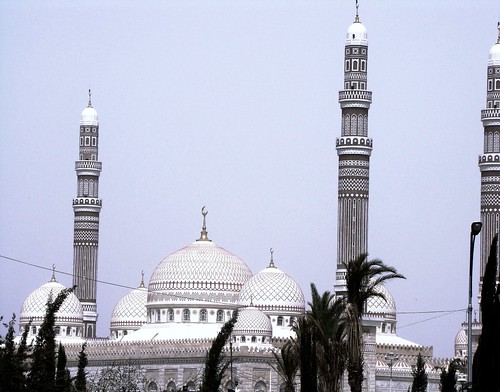 The mosque has additional building to women for performing prayer. The area of the building is 288 square meter with 86 meter length and 14,8 meter width and with the highest of 5,20 meter. The building has two entrances eastern and western in addition to 30 bathrooms.

Mosque includes a college for teaching Koran and Islamic Law. The college is composed of 3 floors with an area of 7,759 square meters including the area of the open gallery estimated at 2100 square meter. The colleges is composed of several sections for the holly Koran and its sciences, Sharia or Islamic law, foundations of "Fiqh" or jurisprudence, belief and Sunnah.

The mosque contains a hall for ceremonies, libraries, green areas and car parks in addition to Assaleh Library that contains thousands of books and references, antique, historical, scientific and literary manuscripts with library for men and another one for women and a section for modern translation.

There are 102 bathrooms distributed on eastern and western sides with two bathrooms for people of special needs. There are also 108 bathrooms outside the galleries. The mosque contains a private well and irrigation network for the green areas surrounding the mosque.

A number of Scholars and heads of delegations who have participated in formal opening of Assaleh Mosque praised uniqueness of the mosque and the College of the Holly Koran and Legislation.

Talking to Saba, the delegations praised architectural, adornment and technical components making the mosque unique and mixing it with originality of ancient Yemeni architecture and civilization and modernity.

Sheikh al-Azhar Mohammad Tantawi says:" Assaleh Mosque is a blessed mosque based on holly foundations to which ten thousands of worshipers come for performing prayers."

"We want from Assaleh Mosque to be assigned for the purpose its founder wanted; a edifice for science, wisdom and guidance as the matter for the rest of Allah's houses. Allah says in Qudsi Hadith: 'My houses in the earth are the Mosques and My visitors in are those who are keen on praying in them', " he added, stressing that the mosque must be a place for reform, Taqwa and praying Almighty God and a place for calling for beneficence and for promoting for virtue and warning of vice.

For his part, Secretary General of Muslims Staff in Iraq Sheikh Hareth Adhari expressed admiration for the architectural and artistry construction of the mosque' components saying :" I am very happy to attend the ceremony of opening Islamic milestone in Yemen," hoping that this mosque and the college to be a start for Islamic University in the mosque. 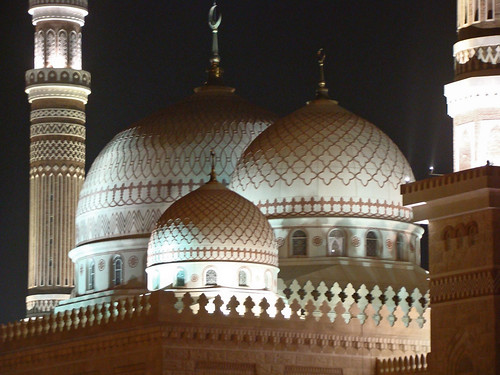 While Minister of Islamic Affairs in the Kingdom of Saudi Arabia Sheikh Saleh Al-Sheikh considered Assaleh Mosque and the college great modern achievement recall Yemen civilization and its religious and material strength and reflects grasping of Islamic civilization.

Meanwhile, Supreme Advisor of Islamic Republic of Iran Haider Muslehi considered the mosque a "religious center for religious and Islamic education of Arab and Islamic Nations," highlighting this Islamic landmark that seeks to spread Islamic values and establishing Islamic unity.

US presses and pushes allies into New Cold War