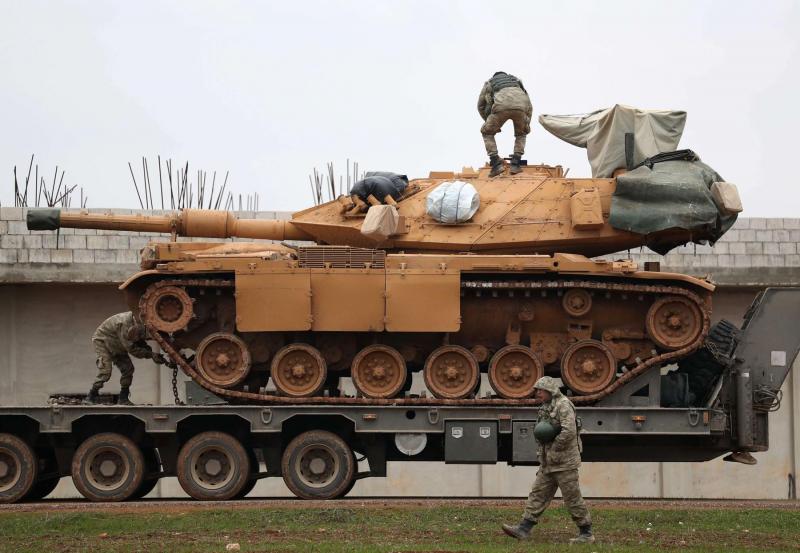 After issuing what amounted to a “declaration of war” against Syrian forces, Turkey finds itself under mounting pressure as tensions with Russia escalate and the threat of further clashes with Syria’s military looms.

The crisis around the Syrian province of Idlib shook the foundations of the entente between Ankara, which supports Syrian anti-government rebels, and Moscow, which backs Syria’s President Bashar Assad, as the Kremlin, the Russian Foreign Ministry and the Russian Defence Ministry all accused Turkey of bad faith.

Ankara’s threats failed to stem the Syrian advance in the region. The Syrian Observatory for Human Rights, a war monitor, reported that Syrian troops had moved close to the town of Atarib, west of Aleppo 15km from the Turkish border. Syria’s state news agency SANA said Syrian troops continued their advance near the strategically important M5 highway.

In a speech February 12, following the death of 13 Turkish troops in clashes with Syrian government forces in Idlib since the start of the month, Turkish President Recep Tayyip Erdogan spelled out an ultimatum for Assad’s forces.

“I hereby declare that we will strike regime forces everywhere from now on regardless of the Sochi deal if any tiny bit of harm is dealt to our soldiers at observation posts or elsewhere,” Erdogan said in reference to 12 Turkish observation points in Idlib set up under agreements with Russia.

Erdogan said Turkey was determined to push Syrian government forces beyond the observation posts by the end of February. “We will do this by any means necessary, by air or ground,” he said. Aircraft striking settlements in Idlib would “no longer move freely.”

Reports and Syrian activists said a Syrian military helicopter had been shot down Febraury 14 west of Aleppo, the second such incident within days. The downing fuelled speculation that rebels were receiving modern anti-aircraft weapons from Turkey.

Even though it came just hours after Erdogan and Russian President Vladimir Putin sought to iron out their differences in a telephone call, the speech by Erdogan included sharp accusations against Moscow.

The United Nations said about 800,000 people are on the move, with many seeking shelter along the closed Turkish border in north-western Idlib.

“I want particularly to underline that the [Syrian] regime and Russia, together with regime-aligned forces, take aim at the civilian population coming from the east,” Erdogan said. “The goal is to clear the region [of civilians] and push the people of the region towards our borders.”

The Turkish leader highlighted a controversial principle of his Syria policy: to remove Assad from power. Turkey played down that goal in recent years to smooth relations with Russia.

“The fight for freedom of the Syrian people is a fight for survival for Turkey’s 82 million people,” Erdogan said.

The Kremlin said Turkey failed to deliver on a promise to neutralise militants in Idlib, something it called unacceptable. The Russian Foreign Ministry reminded Ankara its forces were in Syria without the blessing of the Syrian government and the Defence Ministry said Turkish troops were seriously aggravating the situation in Idlib.

Russian Ambassador to Turkey Alexey Yerhov told the Turkish service of the Russian Sputnik news platform that the second half of January had seen “more than 1,000” attacks by militants from Idlib against Syrian soldiers, civilians and Russian military installations.

“Nobody will be able to push back the Syrian Army that has gone on the offensive,” Yerhov said. “Patience has run out. The Syrian Army has decided to take back every inch of its territory.”

Analysts said the developments showed that Turkey’s tactics in Idlib had run into serious trouble.

“The Turkish approach to have a light footprint in Idlib and the idea that the presence of 12 observation posts would be enough to deter the regime has totally failed,” Thomas Pierret, a senior researcher at the French think-tank CNRS in Aix-en-Provence, said by telephone. “So Turkey has to try something else — a massive deployment of troops.”

Pierret said hostility to the US presence in Syria, which had been “the cement of the Turkish-Russian cooperation,” was no longer playing the key role in the entente that it once did.

“The Turkish-Russian partnership is in very bad shape. There is hardly any common ground left,” he said. “It is a very one-sided relationship now. Turkey needs Russia but there is nothing that Turkey can offer Russia inside Syria.”

Kerim Has, a Moscow-based expert on Turkish-Russian relations, called Erdogan’s speech a “declaration of war” against Syria. “It’s his ‘personal war,’” Has said about Erdogan.

Following Erdogan’s speech, Turkish Defence Minister Hulusi Akar struck a softer tone by suggesting that Turkey would act against “radicals” in Idlib that violate a ceasefire there but Akar also said Turkey was sending reinforcements to Idlib to “take control” of parts of the territory.

The foreign ministers of Russia and Turkey, Sergei Lavrov and Mevlut Cavusoglu, were to meet on the sidelines of the Munich Security Conference.

The United States is eager to exploit the Turkish-Russian tensions over Idlib to rebuild a relationship with Ankara that has gone from crisis to crisis in recent years. James Jeffrey, the US envoy for Syria, was to meet with Turkish officials. The US Embassy said they would discuss working together towards a political solution to the conflict.

“Today, our NATO ally Turkey is facing a threat from Assad’s government and Russia. We are here to assess the situation with the Turkish government and offer support if possible,” Jeffrey said after his arrival in Ankara February 11.