UN to cut back aid to Houthi-controlled Yemeni areas: Reuters 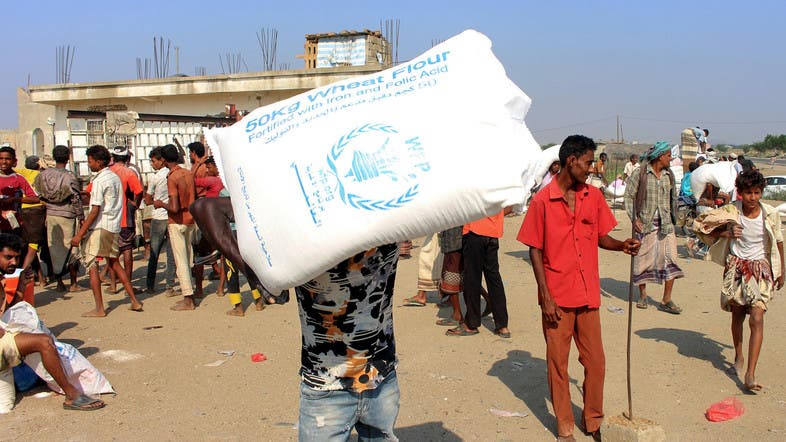 The world’s biggest humanitarian aid operation will be scaled-down next month in Houthi-controlled Yemeni areas, because donors and aid workers say they can no longer ensure that food for millions of people is reaching those who need it.

Humanitarian sector sources told Reuters Houthi authorities in northern Yemen were obstructing efforts to get food and other assistance to those in need, to an extent that is no longer tolerable.

“The operating environment in north Yemen has deteriorated so dramatically in recent months that humanitarians can no longer manage the risks associated with delivering assistance at the volume we currently are,” a senior UN official said.

Unless things improve, humanitarians and donors will have “no choice” but to reduce assistance, the official said. This would include curtailing some food aid overseen by the United Nations World Food Program (WFP), which feeds more than 12 million Yemenis a month, 80 percent of them in Houthi areas.

The United Nations describes Yemen as the world’s biggest humanitarian crisis and says millions of people there live on the verge of starvation. There is little precedent for such a large-scale aid program being scaled-back in this way, which the sources called a sign of the seriousness of the concerns.

The Supreme Council for the Management and Coordination of Humanitarian Affairs (SCMCHA), a Houthi body formed in November to oversee aid, did not immediately respond to a request for comment.

Aid agencies have for the past year publicly and privately complained of worsening operating conditions, lack of travel permits and other access restrictions which have left workers in northern Yemen “exasperated”, in the words of one agency employee, and unable to deliver to full capacity.

“At high levels this has left the agencies, NGOs, and donors asking: can we continue like this or do fundamental changes need to be made?” said another source familiar with the discussions between donors and aid distributors.

No donors, UN agencies or charities have yet made public announcement of aid reductions. Two sources told Reuters cutbacks could begin at the start of March after consultation with donors this month. Two said they could begin sooner.

Yemen has been mired in conflict since the Iran-aligned Houthis ousted the government of President Abd Rabbu Mansour Hadi from the capital Sanaa in late 2014. A coalition of several Arab countries has fought to restore Hadi.

“No one wants to walk away from a crisis, certainly not a crisis as big as the one in Yemen, but humanitarians have to adjust what we are doing based on the risks we are facing,” the UN official said.

Another source said discussions were ongoing about the extent of any suspension, given the severity of the crisis: “Any talk of suspension needs to be carefully considered before a decision is made.”

Biometric data
One of the reasons for the suspension is a dispute over a biometric system designed to record who receives aid to prevent it being stolen. The WFP partially suspended food aid delivery for two months in Sanaa in June in a dispute over control of the biometric data. Eight months on, the biometric registration system is still not operational in Houthi areas.

A Houthi official told Reuters WFP’s demand to control the data violates Yemeni law, and the group had proposed alternative systems to keep aid from being diverted.

UN documents seen by Reuters show that agencies have repeatedly asked Houthi officials over the past year to facilitate humanitarian worker access and deliveries.

When deliveries are delayed, food can spoil and has to be destroyed. Aid workers complain that they have been denied access to fumigate stored food to protect it from pests.

In one case in the poor Hajjah district, around 2,000 tons of food that should have been distributed early last year is now scheduled for destruction. Permission was not granted either to distribute it or to treat it to prevent it spoiling.

“We have seen a disturbing trend that when we inform [Houthi authorities] of the need to remove any infested stocks from the distribution centers, they arrange for media to accompany them and portray it as if WFP is distributing expired or infested food,” one of the documents to Houthi authorities says.