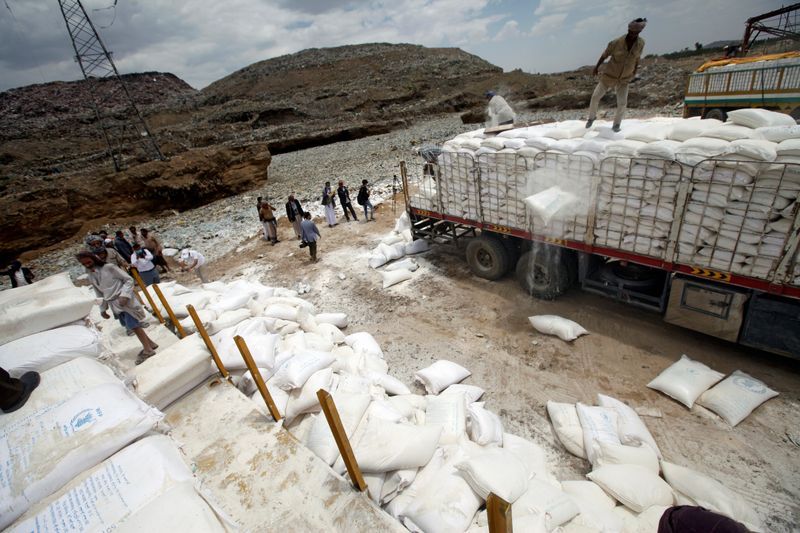 Artillery fire on Dec. 26 damaged WFP grain stores at the Red Sea Mills located on the front line in the Yemeni port city of Hodeidah.

Milling resumed on Dec. 30, the WFP said in a statement.

The mill and silos have become a focal point of the conflict in Hodeidah, where the United Nations is trying to enforce a ceasefire and troop withdrawal agreed a year ago at peace talks in Stockholm.

The Red Sea Mills lie on a front line between forces loyal to President Abd-Rabbu Mansour Hadi’s internationally recognized government and those of the Iran-aligned Houthi militia.

The stores were off limits for around six months from late 2018 and at risk of rotting until the WFP negotiated access in February and began cleaning and milling what had been enough grain to feed 3.7 million people for a month.

So far just over 4,500 tonnes have been milled into flour and dispatched, the statement said.

The war has severely hit food supplies in Yemen and millions of people are at risk of starvation in what aid agencies describe as one of the world’s worst humanitarian crises.

Yemen has been mired in almost five years of conflict since the Houthi movement ousted Hadi’s government from power in the capital Sanaa in late 2014, prompting intervention in 2015 by a Saudi-led military coalition in a bid to restore his government.

The United Nations has been trying to re-launch political negotiations to end a war which has killed tens of thousands of people and pushed millions to the brink of famine.

A year on from the Stockholm deal, U.N.-mediated talks between warring parties in the Hodeidah have so far failed to achieve a full troop withdrawal and ceasefire.