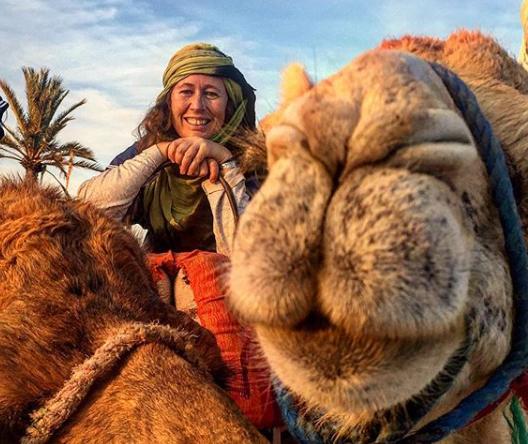 LONDON - Scottish adventurer and presenter of BBC2’s “Morocco to Timbuktu: An Arabic Adventure” series, Alice Morrison is using her trekking experience to embark on a thrilling but perilous 2,000km journey across the Sahara Desert.

In March, Morrison became the first woman to walk the length of the Draa River, the longest river in Morocco.

“It was the most incredible experience. I walked 1,500km down Draa River, discovered a lost city and found the tombs of the giants,” Morrison said.

“The Sahara expedition is the second leg of my epic expedition towards exploring the whole Morocco which I can’t stop exploring. It’s like an addiction, a compulsion.”

Morrison said she planned to start her 3-month journey November 26, with the same team from the Draa Expedition, including three local guides and six camels, from Oued Chbika in Tan-Tan province.

“Oued Chbika is where I finished my Draa Expedition. It’s the most glorious place with golden dunes onto the crashing waves of the Atlantic,” she said.

Morrison said she will rely on three experienced Amazigh guides to survive in the treacherous desert.

She is no stranger to tough conditions or walking through deserts. In 2014, she completed the Marathon des Sables, in which she completed more than 250km over six days in the Moroccan desert in scorching temperatures.

“We will be walking from well to well to get water with the help of three Amazigh guides. We only take with us what we need to survive with and we will be living very close to nature,” she said.

Jean-Pierre Datcharry, the expedition’s organiser, warned of a serious risk of running out of water.

“There is no up-to-date information on where viable wells currently are,” said Datcharry, who added that he is establishing a safety plan in place, including provision drops and emergency water supplies.

“Food for the camels is also a concern. We will be following the nomads’ grazing routes but, if climate change has dried out the camels’ diet of small shrubs and acacia trees, we will have to find and buy fodder,” he said.

Morrison stressed that the aim of this expedition was to explore this virtually unknown part of the Sahara.

“I will be tracking the deathstalker scorpion, hunting for meteorites, investigating the unique sand statues of the south and searching for the lost great bird monuments, which lie hidden in the dunes,” Morrison said.

“We will have to be aware of the areas that are mined between Morocco and Algeria,” she added as her journey will take her from Oued Chbika directly south to the Moroccan-Mauritanian border.

“I know this is going to be tough but I know I have a great team around me. The Draa Expedition taught me a lot and I feel ready to take on this, my biggest challenge yet,” said Morrison.

Morrison will be examining the effects of climate change on the Sahrawi people as well as fauna and flora.

“Vitally, myself and the team will be recording what is happening to the Sahrawi people and the environment of the Sahara as the world heats up. In the last 100 years, the Sahara has expanded its territory by 10%, eating into arable land as desertification spreads,” she said.

“Desertification is one of the greatest environmental challenges of our time and climate change is making it worse.”

Morrison settled in Morocco after finishing her marathon five years ago.

“I came to Morocco to run the race but I fell in love with the country and with its people and now I live in Imlil,” she said.

Her captivating photos on Instagram perfectly illustrate her fondness for Morocco. She said she intends to write a book about her Sahara journey.

For the first time in 300 years, this island in Cape Cod is open to the public

Why Greece could be Europe's best holiday ticket right now