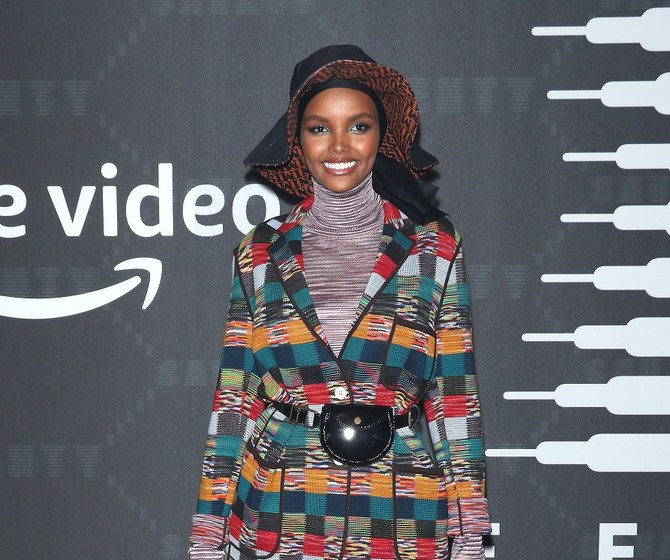 Halima Aden bid goodbye to Riyadh on Tuesday as she’s scheduled to speak at Glamour’s Women of the Year Summit in New York this weekend.

The Somali-American model uploaded two videos on her Instagram Stories that showed her driving down a palm-tree lined street.

“Bye bye, Riyadh,” she wrote in a text that accompanied the first clip. “Inshallah, I can’t wait to come back,” she added, implying that a visit back to the Kingdom could come in the future.

Though she’s previously been to the Middle East — she’s visited the UAE on numerous occasions —it was the 22-year-old’s first time in Saudi Arabia.

Aden first made international headlines by competing as the first veiled contestant in the Miss Minnesota beauty pageant, before making her New York Fashion Week debut at Kanye West’s Yeezy Season 5 show in 2017. The model was in Saudi Arabia for the first Fashion Futures event Riyadh.

The event, which kicked off on Nov. 4, is a fashion-focused conference in the Kingdom that features interviews, seminars, panels, masterclasses and workshops. On Tuesday, the hijab-wearing model conducted a talk and a Q&A session during the three-day extravaganza.

Her keynote address was entitled “Don’t be afraid to be the first” — and the model certainly knows all about firsts.
In addition to being the first-ever model to appear on a Fashion Week runway wearing a hijab, Aden also made history when she appeared on the 2019 issue of Sports Illustrated wearing a scarf and burkini.

“Don’t change yourself… Change the GAME!! Ladies anything is possible!!! Being in Sports Illustrated is so much bigger than me. It’s sending a message to my community and the world that women of all different backgrounds, looks, upbringings... can stand together and be celebrated,” the model posted on Instagram at the time.

Meanwhile, she is the first hijab-wearing model to grace the cover of a Vogue magazine edition with her June 2017 Vogue Arabia cover.

It’s impressive for someone whose first chapters of life couldn’t be more far removed from the fashion industry. She was born in the Kakuma refugee camp in Kenya, before relocating to the US with her family when she was six-years-old.

She would go on to cinch bookings at renowned international brands, such as Alberta Ferretti and Max Mara, land major campaigns with the likes of Nike, Fenty Beauty and MAC Cosmetics and appear on the pages of prestigious publications.

Suspect Your Friend Is Jealous of You? Here's What to Do