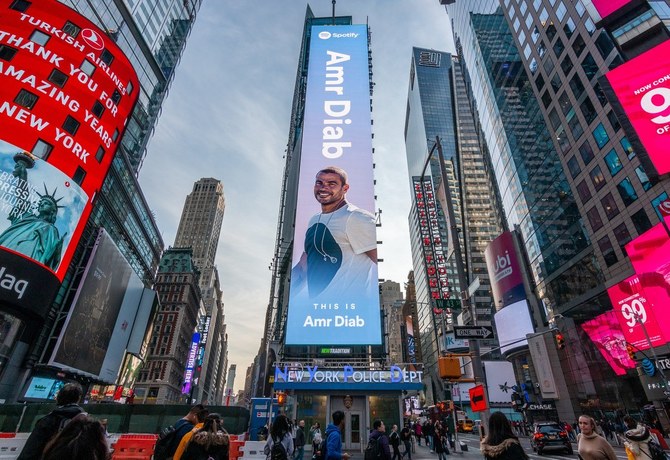 Amr Diab is the first Arab musical artist to get his face plastered on a Spotify billboard in New York City’s iconic Times Square.

The streaming giant projected a smiling portrait of the Egyptian crooner in one of the most-visited landmarks in the Big Apple in a bid to promote the music and culture of the Middle East and North Africa.

“Today we are celebrating Diab’s legacy and we are proud to see him shine so brightly - literally - on the global stage,” says Claudius Boller, Managing Director, Spotify Middle East and Africa in an official press statement.

According to Spotify, the legendary singer’s music is most streamed in the United States, followed by Sweden, Germany, the UK and Canada.

His album “Nour el-Ain” (Our Eyes Beam) brought him global success and earned him the title of “The Father of Mediterranean Music” for his style of blending Egyptian and western rhythms.

He was also one of the first artists to headline a concert in the Kingdom of Saudi Arabia during the Saudia E-Prix in 2018. He was part of a superstar lineup that included the likes of Enrique Iglesias, Jason Derulo, the Black Eyed Peas, One Republic and David Guetta.