Lebanon protesters tell the president: &lsquo;it&rsquo;s time for father of all to leave&rsquo; 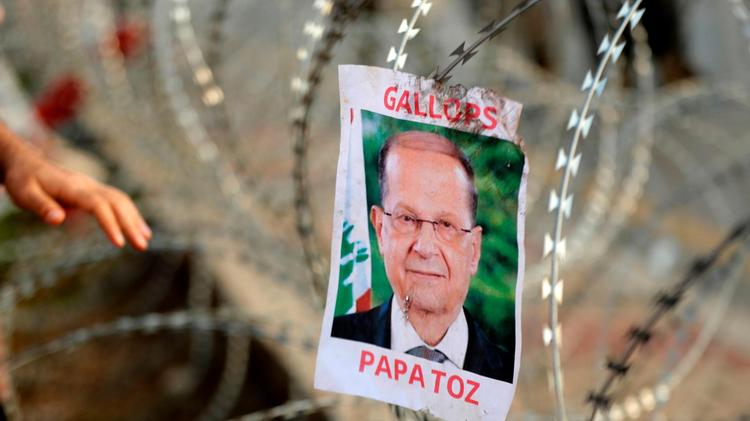 Protesters closed the highway from the Lebanese capital to Baabda Palace on Wednesday and refused an invitation to meet President Michel Aoun.

The demonstration outside the presidential palace came on the 28th day of the mass uprising against the government and decades of corruption.

On Wednesday evening, men with guns and knives arrived at a protest in Jal El Dib, north of Beirut, leading to fights with protesters. At least one man fired into the air before being disarmed.

Earlier in the day, Mr Aoun conveyed a message through the presidential guard for the protesters outside the palace to send in a delegation to discuss their demands.

But the demonstrators refused to send a small number of people, insisting that if the president wanted to hear their complaints he would have to speak to all those gathered.

Protesters expressed anger at an interview Mr Aoun gave on Wednesday evening, in which he said: “If they do not like any person in authority, let them emigrate.”

"How is that possible in any country in the world? This is so stupid. He wants us to leave, 250,000 people to leave.

Architecture student Nicholas Habib, 25, said: “We have a lot of requests. The first is the resignation of Michel Aoun and then we have to make selections and a technocratic Cabinet. 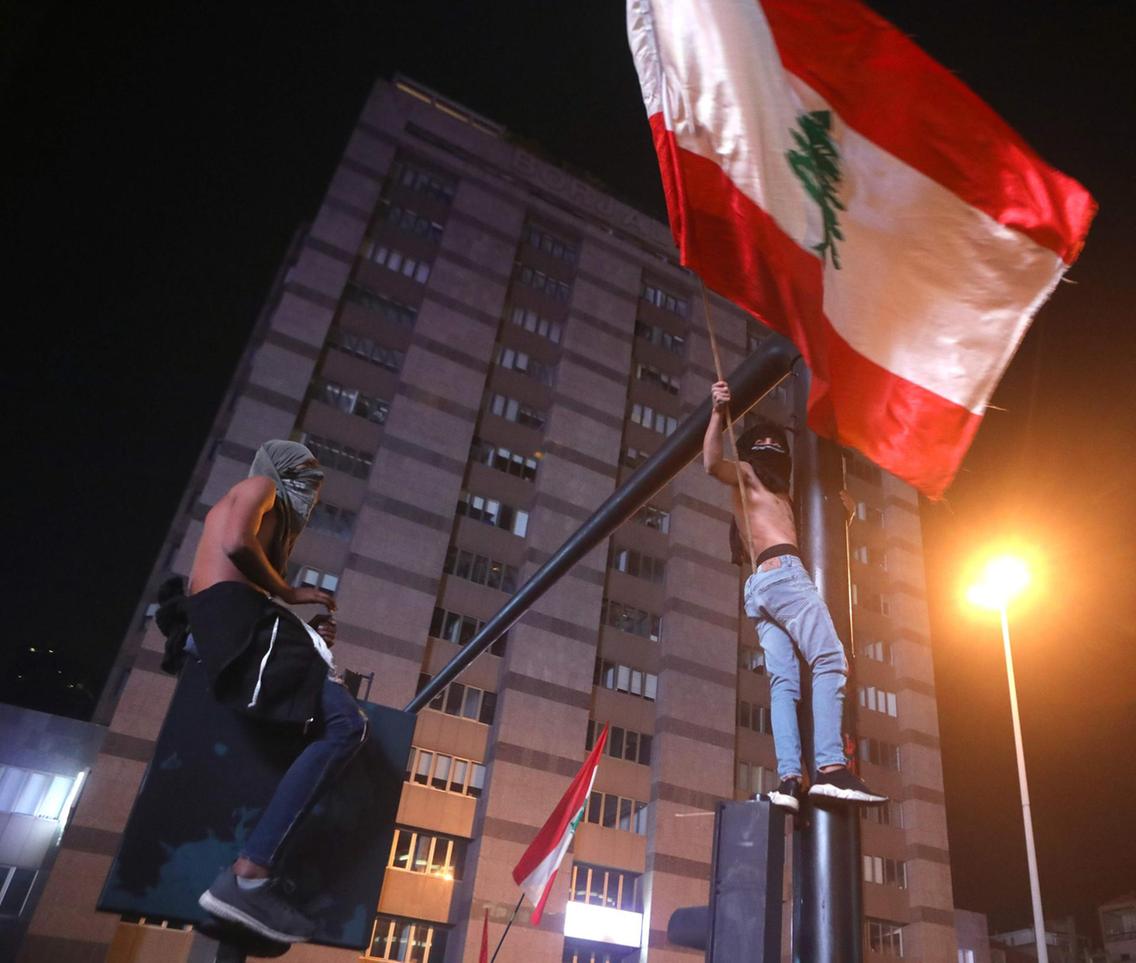 “We want technocrats, we do not want politicians. It is engineers who are going to be judges and in the ministries, people who have nothing to do with politics.”

“How can a president of a republic say that to his people?” he asked.

But Mr Habib said he was optimistic that the president would eventually be forced to resign.

Marie-Therese Tabet, 65, who lives in Beirut, called for a new government that could stop the brain drain.

“Our children, who are supposed to work, are highly educated people, hyper-responsible, but can’t find a way out so they go abroad where they succeed," Ms Tabet said. 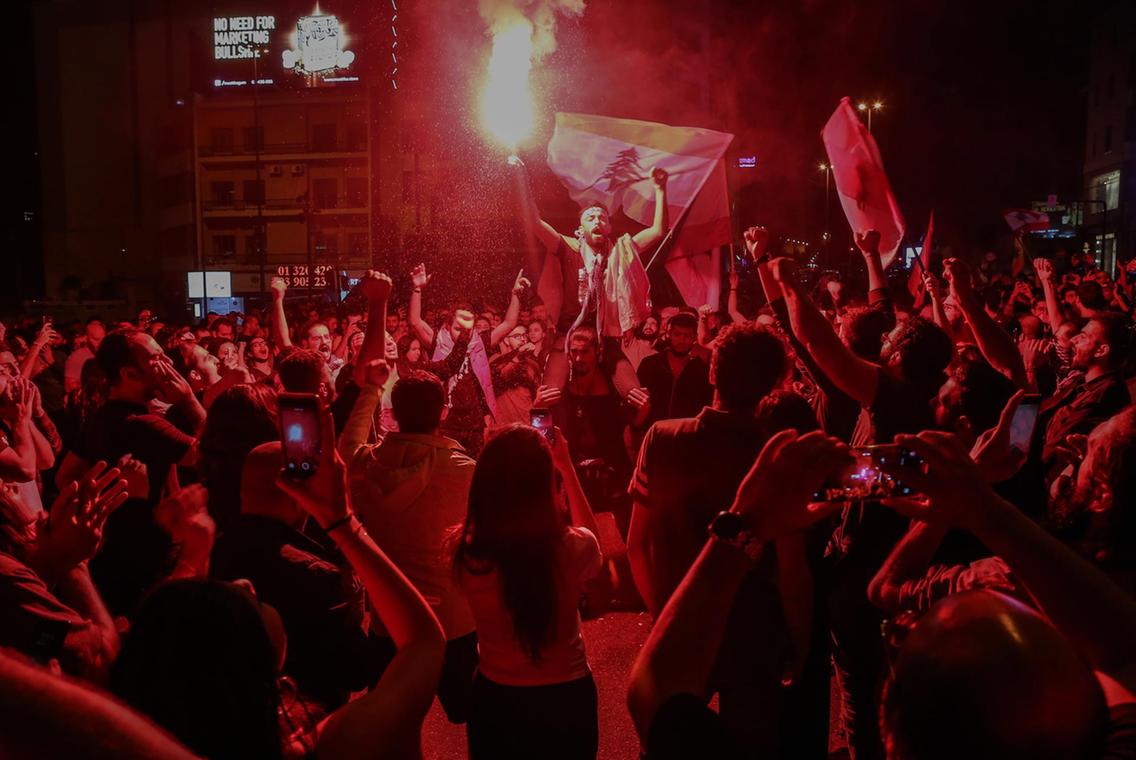 "Why not take advantage of these brains to maintain this country?”

Two women standing on the motorway to Baabda said the president’s message had been provocative and spurred people to hit the streets on Wednesday.

“Instead of calming things down, people got very angry and it’ll probably push the level of anger and tension even higher,” one of the women said.

“Of course we don’t trust him. Why would the people trust a government that failed them for years and years?

"He was just not listening to what people were saying, and it ended up with a terrible outcome last night.”

On Tuesday evening, Alaa Abou Fakher, 38, a father of three and a member of the Choueifat Municipality who supported of the Progressive Socialist Party, died after being shot by a solider.

The army announced that the soldier was arrested and an investigation launched after Abou Fakher’s death as the military tried to clear a motorway in the Khaldeh area just south of Beirut.

It is unclear why the soldier opened fire and whether he intentionally shot the protester.

The exact details of the incident remain unclear but images on social media show Abou Fakher lying in a pool of blood next to his wife one of his sons.
The Daily Star newspaper reported that he was shot after an argument with a member of the Mount Lebanon Intelligence Branch.

The newspaper reported that Abou Fakher was related to the officer who shot him and said the pair knew each other well.

His widow called on people to take to the streets, saying “no one should remain in their homes", local media reported.

Abou Fakher was the first protester killed by the military but official sources told The National it was the fifth death of the protests.

The sources said, however, that it was hard to put an exact figure on casualties because they were not directly tied to the protests or the military.

Demonstrations have been largely peaceful, except for a few scuffles with the security forces and government supporters,

The source said that on the first night of the protests, two Syrian workers choked to death from a fire that spread to a building near major protests in the capital.

On October 19, Hussein Al Attar was stabbed in an altercation with a man trying to bribe people to pass a roadblock near the airport, and Omar Zakarina died days after falling from roof of the old theatre in downtown Beirut on the same day.
Caretaker Prime Minister Saad Hariri spoke with army chief Gen Joseph Aoun and the head of the Internal Security Forces, Maj Gen Imad Osman, late on Tuesday evening.

Mr Hariri told them of the "need to take all measures to protect citizens and ensure the safety of the demonstrators".

He also spoke with Druze leader Walid Jumblatt to express condolences for Abou Fakher's death and thanked the leader of the Progressive Socialist Party for his call for calm. 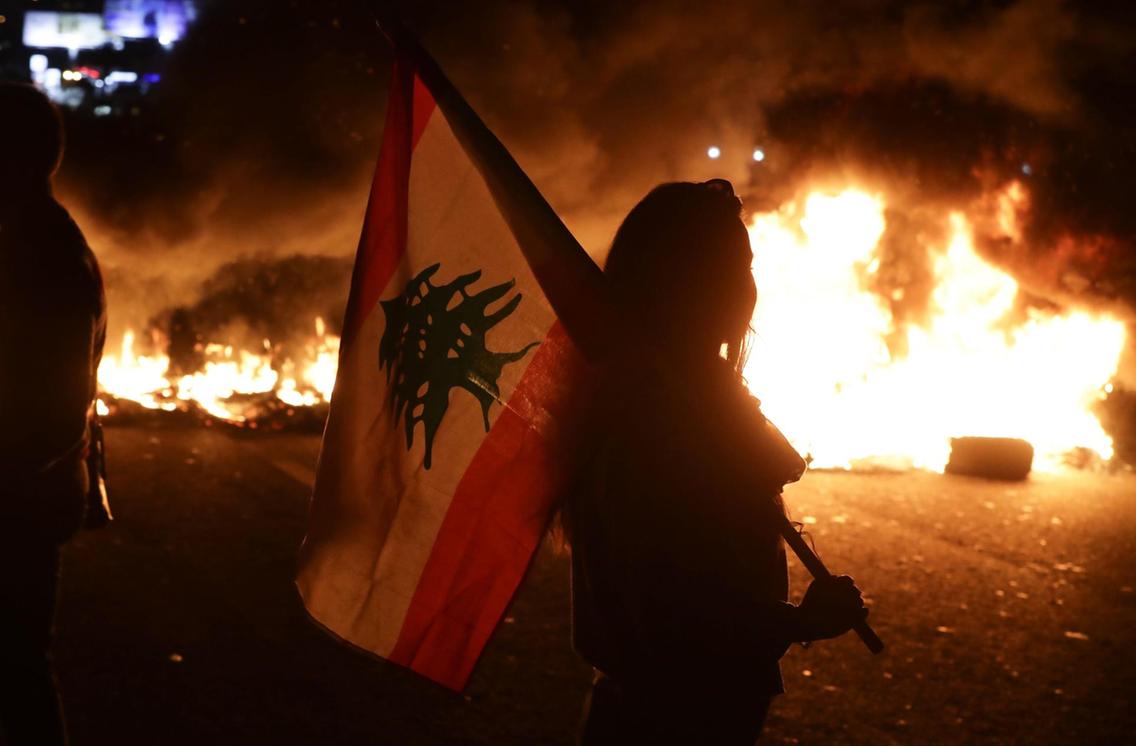 France has extended an offer to assist Beirut, a tweet from Baabda Palace said.

It did not indicate what assistance Paris was offering but the French ambassador Bruno Foucher has been meeting politicians and the Foreign Ministry’s envoy to the Middle East, Christophe Farnaud, visited the president.

Public restrooms: What you need to know about using them safely amid the pandemic