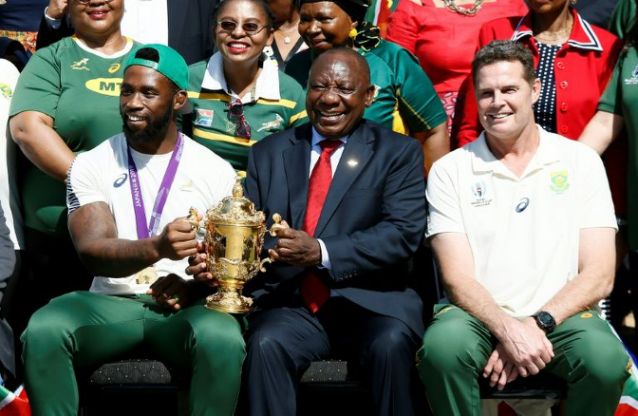 The World Cup-winning Springboks began their homecoming tour on Thursday as thousands of people cheered them in Pretoria and President Cyril Ramaphosa joked he was less popular than captain Siya Kolisi.

The Springboks' 32-12 victory against England in Japan has been greeted with joy in South Africa, where rugby was once the preserve of the white minority population.

Later Thursday, the team was to visit Soweto, the township near Johannesburg where they were once hated as a symbol of apartheid aggression and oppression.

The team, whose victory has helped lift the spirits in a country beset with economic problems and racial inequality, began their tour in Pretoria with a parade on a black bus emblazoned with "Champions" as Kolisi held the Webb Ellis trophy aloft.

After welcoming the team to Union Buildings, Ramaphosa thanked "our warriors" on behalf of a grateful nation and reflected on the huge popularity of Kolisi, the first black captain of a Springbok Test side.

"They’ve been at war, they won and they brought the World Cup back to South Africa where it belongs," the president said.

"They put us on the world map. We thank them for the impact that this victory has had in our country ... you've lifted the spirit in many people in our country.

"It's good we don't have an election, I would have to compete with Siya Kolisi ... (he) could have been the president."