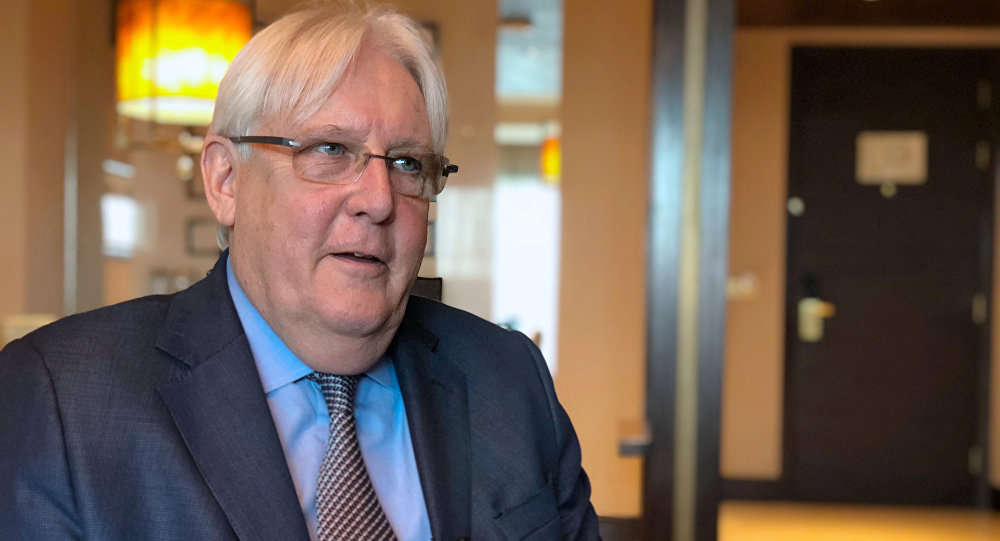 The Stockholm Agreement reached by Yemeni warring parties last December is not a condition for the political process to proceed, the UN envoy for Yemen said Thursday, though the Yemeni official government insists on the pact.

We should remember that the Stockholm Agreement was a humanitarian deal to bridge an outstanding gap, put not a precondition for political process, Martin Griffiths told the Saudi Asharq Al-awsat.

The pact includes certain measures for trust building with the aim of boosting, but not obstructing, the peace process, he added.

But the Yemeni internationally-recognized government has repeatedly said it would not participate in any new political process before the deal is fulfilled.

To go to new talks for ending Yemen's war while Stockholm Agreement has yet to apply would embolden the Houthi group to not implement any future deal, the Yemeni Foreign Minister Mohamed al-Hadhrami told the Swedish special envoy Peter Simnpy on 21 October.

Griffiths, however, expressed optimism at the noticeable progress made last in Hodeida where joint monitoring points have been erected along the Red Sea city's fringes.

This is not the only positive step that would enhance de-escalation in flashpoints and contribute to lifesaving, but there is also tangible progress made to show growing trust between parties. This is very significant and we have to support, he added.

The UN envoy expressed interest in the deal's economic aspects linked to ports' revenues, as he and his team "continue working with stakeholders to secure a settlement for ports' revenues and management. We're committed to working on Hodeida through the UN mission."

Nonetheless, this should not divert "our attention away from our main focus and our core mission, i.e. to find a political solution for this conflict."

Among promising indications in Yemen, according to Griffiths, are the lower violence in the north, release of prisoners, allowing oil tankers in Hodeida, allowing for relief agencies to help people in need in Doraihimi, as well as the successful Jeddah talks on the south, with a deal that would be the first step towards constant peace across the country.

All these glimmers give hope and reflect goodwill among parties and the efforts they exert to find a common ground and agree on a number of measures to alleviate Yemenis' suffering, Griffiths added.

On the prisoner file, the UN envoy said they cooperate with the parties concerned with talks to make the Houthi release of 290 prisoners a start for further initiatives that would facilitate the release of all detainees, in cooperation with the ICRC.

Griffiths hailed the Riyadh pact between the Yemeni government and the Emirati-backed Southern Transitional Council as a chance that would hopefully push towards a real progress and leave positive impact on the ground amid attempts to find a solution.

Yemen has been racked by a 4.5-year bloody conflict between the Yemeni government's forces, backed by a Saudi-led coalition, and the Iranian-backed Houthi rebels who ousted the government in 2014.

Parties to the 4.5-year war in Yemen, after 8-day peace talks in Sweden, reached on the 13th of last December an agreement providing for ceasefire in Hodeida and redeployment of both sides' forces, exchanging prisoners and alleviating blockade imposed by Houthis on Taiz.

But none of this has taken place so far, with both sides trading blames for trying to thwart the deal.