Lido offers a shipshape dining experience aboard the QE2 in Dubai 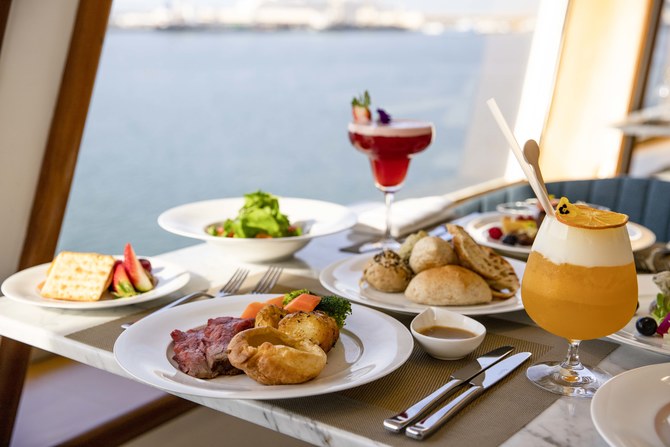 DUBAI- The Lido restaurant, which is aboard the floating hotel and retired luxury ocean liner the QE2 in Dubai’s Mina Rashid, offers a culinary world cruise series spanning Asia, the Middle East and the Mediterranean over four nights.

Delhi Delights is on Sundays, East meets East is on Wednesdays, Arabesque is on Thursdays and The Med is on Fridays.

For mains there are tagines and couscous from Morocco, Levantine mahashi (stuffed vegetables), as well as other regional staples such as grilled meats, shawarma and falafel.

The shawerma was already cut to pieces for the visitors to eat, and unlike the traditional version, had some fresh vegetables.

Desserts on offer include baklava, kunafa, Umm Ali and chocolate cake, with moist and rich textures available throughout the dessert buffet. Despite the Arabic theme, the Middle Eastern offerings paled in comparison to the Western desserts, which seemed unfair to a region so famous for its sticky sweet treats.

Dinner was a good experience as the staff were attentive and the atmosphere was welcoming. The pastel interior, combined with warm lighting, added to the enjoyment.

Most of the food was decent, although some dishes were exceptionally tasty while others were slightly below average. The standout dishes were the mahashi and ribs, as the vegetables were not overcooked and the meat was soft. juicy and exceptionally flavorful.

The QE2 made its first trip in 1967 from a shipyard in Clydebank, Scotland.

The former liner was famous for its luxury and elegance and was the jewel in the crown of shipping firm Cunard.

She is now permanently docked at Mina Rashid and houses a museum, restaurants, cafes, a pub, a club, a cabaret-style venue, a hotel, a spa, event rooms and ballrooms decked out in retro decor.

The QE2 is operated by PCFC Hotels, which is a wholly owned subsidiary of the government of Dubai’s Ports, Customs & Free Zone Corporation.

The culinary world cruise series buffet costs from AED130 ($36) per person. Dinner starts at 7 p.m. and ends at 11 p.m and includes soft drinks.