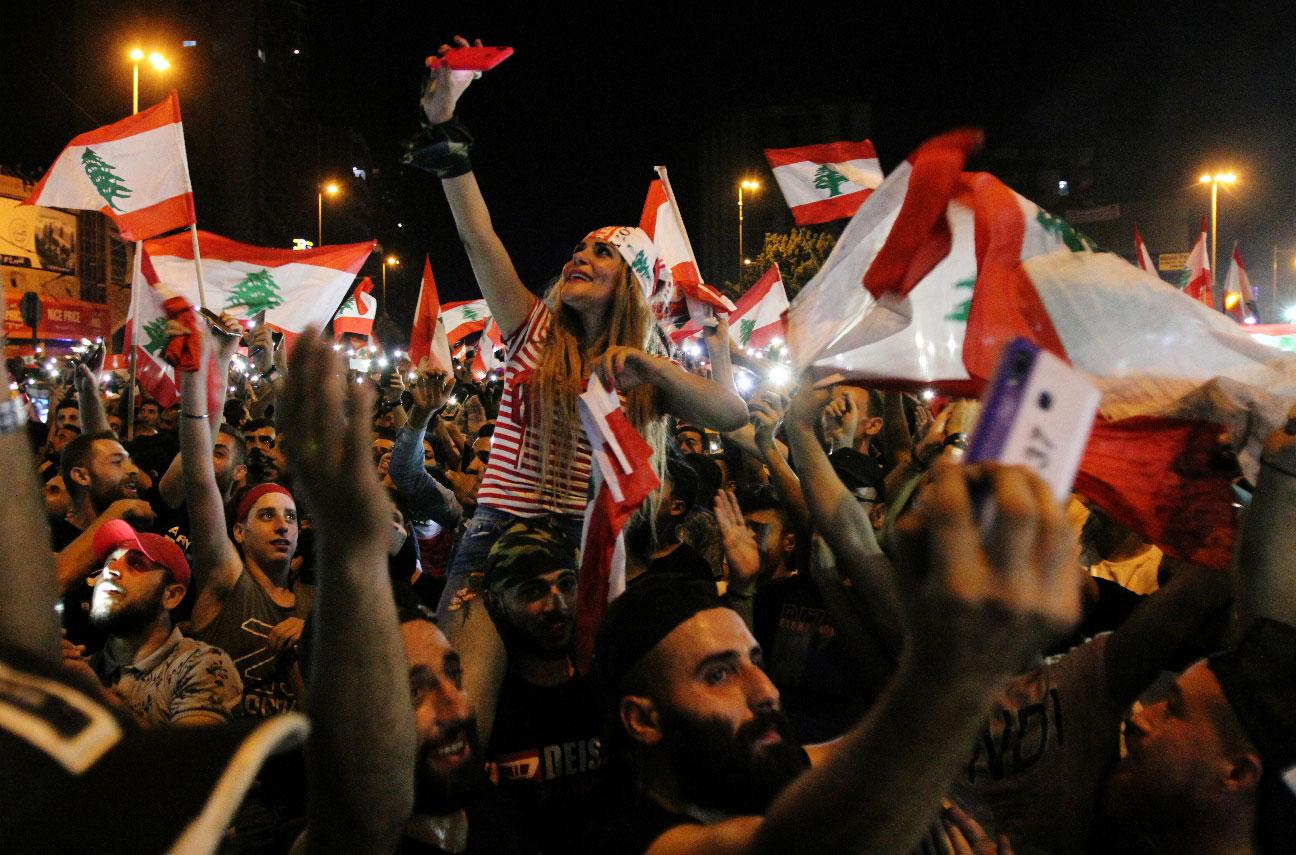 TRIPOLI - The northern seaside city of Tripoli, once perceived as a hotbed for insurgents, has emerged as the scene of Lebanon's most festive protests, with euphoric crowds dancing deep into the night.

For days, hundreds of demonstrators denouncing dire living conditions, corruption and tax hikes, have converged on Tripoli's Al-Nour Square, with focused protests evolving into an impromptu concert after the sun sets.

In unprecedented scenes for Lebanon's relatively conservative Sunni Muslim heartland, a DJ blasted beats from a balcony as protesters in the square below turned on the torches on their mobile phones creating a sea of twinkling light.

Gathering around a huge silver sculpture of the word "God", people distributed free lemonade and sweets, as demonstrators chanted slogans and danced to popular anthems, including the Italian hit "Bella Ciao".

Mahdi Karima, the 29 year-old DJ behind the sound of Tripoli's uprising, said the idea of a protest rave rapidly spread across Lebanon.

"It gave the Tripoli protests a civilised character and it was talked about by all the Lebanese," he said.

"This revolution broke stereotypical depictions of the city," he said.

From 2007 to 2014, Lebanon's second city was the scene of frequent clashes between Sunni residents of the Bab al-Tebbaneh district, and Alawite residents of neighbouring Jabal Mohsen.

The security situation has been quiet since the army deployed to the area in 2014, but Tripoli is still widely seen as a volatile militant bastion like Afghanistan's Kandahar, spiritual birthplace of the Taliban.

Hundreds of men from the Tripoli region have travelled to Syria to fight alongside jihadist groups.

That was until the festive scenes this weekend turned that image on its head.

After years of interviewing hardline extremists and filming children holding guns in the city, the Lebanese media is now streaming live images of partying from its main square.

"Tripoli paid a high price due to the current political system and bore the stigma of terrorism. Everyone was afraid of entering this city, seen as an extremist and Islamist place," said Amal, a 22-year-old student.

But "the residents of Tripoli surprised everyone in Lebanon and abroad with this civilised protest," she said.

"We broke their preconceptions."

Footage from the protest-turned-rave went viral on social media networks and aired on local news broadcasts, encouraging protesters from across northern Lebanon to join the Tripoli demonstrations, even Christians from neighbouring areas.

"It truly felt like a wedding," said Mahmoud Shawak, a 50-year-old protest organiser.

Like in other parts of the country, protesters in Tripoli spoke out against their traditional sectarian leaders, who are among the wealthiest men in the country.

They tore down posters of their parliamentary representatives and chanted the popular refrain of the Arab Spring uprisings of 2011: "The people demand the fall of the regime."

Marginalised for decades by the central government, Lebanon's second city is among the most impoverished in the country.

Its commercial port has been left to fall into disrepair, and an outdoor exhibition site designed by Brazilian architect Oscar Niemeyer lies abandoned and at risk of ruin.

According to a 2015 study by the United Nations, 57 percent of the population in Tripoli live at or below the poverty line and 26 percent suffer extreme poverty.

Spillover from the conflict in neighbouring Syria has only worsened the situation.

"Tripoli is revolting because it is neglected and oppressed," said Nafez Muqadam, a 60-year-old activist and doctor.

"The country will be destroyed if the ruling class remains."