A Tourist in Afghanistan

A visit there today makes it clear that there are two Afghanistans. There’s the Afghanistan at war, to the south, particularly in the provinces of Helmand and Kandahar. But there’s an Afghanistan at peace, with varying levels of stability from jittery, paranoid Kabul to the carefree Mazar-i-Sharif in the north -- Afghanistan’s fourth largest city -- where I spent most of my time during a reporting trip in May.

I stayed at the Barat Hotel, one of just two in the city. I had an entire floor to myself, as did each of the six other guests. The tourists had come to see what Afghanistan was like behind the headlines. Some had a mission. One woman from Switzerland had come to understand the plight of the disabled; she was in a wheelchair and wanted to see how a country with 10% of its population disabled by war and disease is dealing with the problem. (Not very well.)

The Barat Hotel stands opposite the Blue Mosque, a complex of pools, green areas and zones of prayer which every evening become

s a bustling confluence of life. The sunsets are sublime; the dying rays catch thousands of white doves, the splash of children playing in the fountains, the flowing movement of burqas and wisps of smoke from men gathered to chat.

In Mazar and its surrounding region, I wanted to see how Afghanistan at peace had been changed through development. I also wanted to get a closer look at things that hadn’t changed -- relics of oppression both physical and psychic -- that have yet to become a thing of the past.

Qala-i-Jangi (House of War), a 19th-century fortress 20km outside Mazar, is a testament to the victory of western forces over the Taliban in the north. The Taliban resisted there during the initial offensive by the Northern Alliance, backed by the US-led coalition forces. Some 300 Taliban fighters held by the Northern Alliance in the fortress rose up and fought for seven days before being subdued by heavy artillery fire.

Today the bullet holes along the walls of the fortress remain unplastered. The rusty remnants of tanks and heavy artillery lie strewn around. Graffiti scratched into black scorched walls in Persian and in Urdu say “Long Live the Taliban” or “In Memory of Mullah Mohammad Jan Akhond”, a Pakistani fighter with the Taliban who died in the conflict.

My tour guide Shoib knows this because he was there during the battle -- as a translator for the US army. In the stable parts of Afghanistan, where the first trickle of tourists dare to wander, people like Shoib, who have worked as translators for the army and press since 2001, are playing guide to the tiny but slowly growing tourism industry; and the major benefit is that they have direct, first-hand experience of some of the most crucial moments in the country’s recent history.

Stories behind the smallest changes

Mazar-i-Sharif, and the surrounding region, is one of the most stable places in Afghanistan, and this stability allows visitors to forget that much of the country they are in is at war. Troops are nowhere to be seen in Mazar, and so it is easy to forget that this security is an artificial phenomenon, propped up only by the presence of 71,000 foreign troops, and dependent on the continued will of the United States and Nato to keep them there. Walking around on your own is unproblematic. There are great stores where you can buy crafted wood, woollen hats, Uzbek embroideries and handmade carpets, some of which depict key moments in Afghanistan’s recent history: the end of the Soviet occupation in 1989, the World Trade Centre attacks on 9/11, and the arrival of the US-led coalition forces later the same year.

The changes that have come to Mazar since 2001 are so great that some returning refugees struggle to find their bearings and the streets and houses where they once lived. Modern glass and concrete buildings have sprung up next to the traditional adobe houses. Many of the roads have been paved, with elaborate roundabouts built in public-private partnership: Local businesses fund the construction and can erect plaques, signs and structures in the centre in honour of their own businesses. The city is in flux. Signs of western influence abound -- new schools, wells, roads all bear plaques attesting to their sponsorship by France, Japan, Sweden. Billboards along the new roads show young, confident professional-looking men and women who s 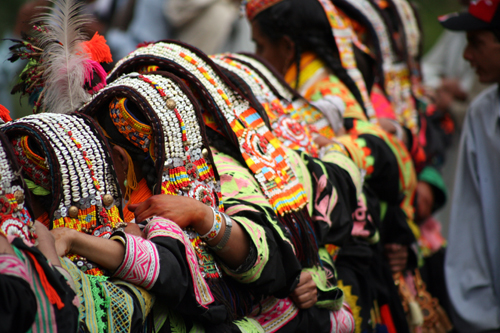 mile out at you as they chat on their brand new mobile phones.

There are stories behind the smallest of things, legacies of the Taliban era. Windows on the fronts of most houses are narrow horizontal strips high up on the wall. Shoib says this was not always so. Afghans used to have windows that let in light from the street but the Taliban deemed visibility of the domestic realm from the outside indecent, and ordered front windows be bricked up.

The cracks along the walls of the Sultan Razia High School for Girls hark back to its previous function as a Taliban base. It was bombed by the US air force in its assault on the Taliban strongholds of Mazar in 2001. Fresh plaster next to the cracks is testimony to the reconstruction of the building and its return to its intended purpose as a powerhouse of female literacy in Mazar. The school educates 5,000 young women, all denied education under the Taliban.

Every positive sign here has a negative parallel elsewhere in the less stable regions. The Taliban have made other girls’ schools bombing targets in an effort to undo what they see as western influence in Afghanistan. But here, in mid-afternoon a woman rings a shrill bell and a sea of girls pours down the stairs, dressed in black tunics and white headscarves, flooding the courtyard outside where they don their pleated burqas as they advance towards the main gate.

Artillery and manpower are the key weapons against the Taliban to the war-torn south. In the rest of the country, the key weapon is concrete. Building roads through the once hard-to-control regions is a means of consolidating the hard-won stability. International development groups have spent over $2bn on roads since 2001. The infrastructure improvements increase development in hard-to-reach areas and deprive the guerrilla side of asymmetrical warfare of its key asset: a territorial upper hand.

Among the people, things change a little more slowly. Psychological legacies of the Taliban era are all around. There is a fear of retribution, a reluctance to criticise authority -- acts of such defiance would have landed you in jail or worse a decade ago. The message to the West is that Afghanistan is free, yet there are red lines everywhere -- government leadership, the poppy harvest, which has been eradicated and the hashish cultivation that has replaced it. People are afraid to speak about such sensitive issues, Shoib said. Remaking Mazar has been a question of security, will and investment. The fear instilled in the people by the Taliban for years will take much longer to ebb.

Mazar’s feeling of security and stability begins to fall away as you get to Kabul, 45 minutes south of Mazar by plane (or six hours by car). NATO and Afghan military personnel abound, there are checkpoints and sandbagged entrances, and Afghan hosts tend to chaperone western visitors.

At nightfall most of the city shuts down, leaving just the western restaurants, drinking places and hotel bars open -- a nightlife of sorts. Si 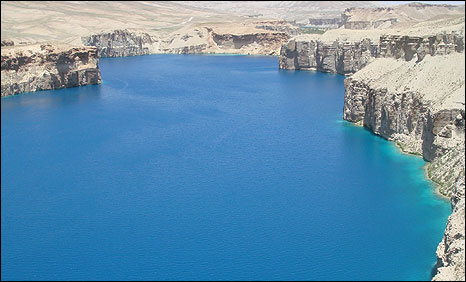 nce a suicide bomb attack in January on the posh Serena Hotel, western-style establishments have increased security precautions. Popping down to the pub for a beer, say to the Hare and Hounds in Sherpur Square, means an armed driver must pick you up at your hotel to escort you to the pub, which from the street looks nothing like a pub since it’s hidden behind a wall of sandbags. The door is metal. You knock, show your passport, get frisked, pass through another door, and another; each is locked behind you before the next one opens. The last door opens to the interior of an English pub (the paraphernalia is imported from there) and the smell of beer.

There is a greater mix of Afghan and foreign cultures in Kabul, an awkward cosmopolitanism. You find many young Kabulis at dusk up on Swimming Pool Hill, in T-Shirts, Diesel jeans, with long surfer hair blowing in the wind, riding on skateboards. The hill is named after the Olympic-sized pool the Soviets built there for its soldiers stationed up on the peak overlooking Kabul. The Taliban left it empty but used its high diving board – criminals and homosexuals were pushed off it. If they survived crashing into the concrete, they were judged innocent. Few did. The young Kabulis now come to the empty pool for its concrete, too: the rough pavements that recent development has brought to the city aren’t smooth enough for their skateboards.

After the 2001 arrival of the United States and its allies, the hill was used by the British as a base from which to direct security over Kabul. The view from its peak is breathtaking: a panorama of Kabul and in the foreground, boys whizzing by on boards, dressed for California.

Don Duncan is a freelance journalist based in Hong Kong. His trip to Afghanistan was supported by the Pulitzer Centre on Crisis Reporting, Washington DC.