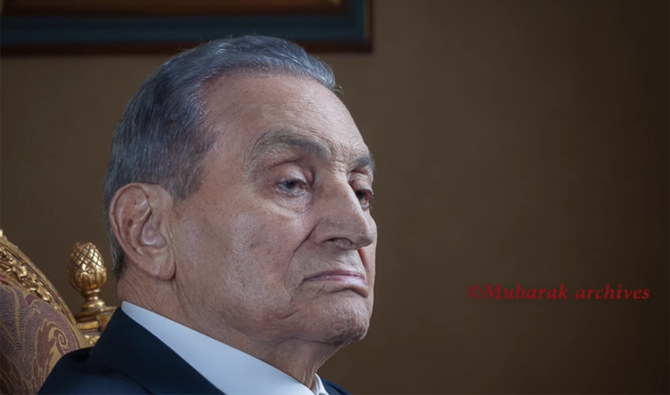 RIYADH- The first video posted by “Mubarak’s Archive,” a YouTube channel launched in the name of former Egyptian president Hosni Mubarak, was viewed almost than 150,000 times within four hours of being uploaded on Tuesday night. The channel attracted 11,000 subscribers in that time.

During the 26-minute video, Mubarak talked about the October 1973 Arab-Israeli War and praised the Egyptian Air Force for the role it had played. He was the commander of the Air Force and deputy minister of defense at the time of the three-week conflict.

“The Egyptian Air Force fully carried out its duties in striking the enemy’s operations center in the October 1973 War,” he said.
At the start of the video, Mubarak said: “To begin, I have to talk about late President Anwar Sadat, who took the decision to go to war. He was a very brave and courageous man. Today as we celebrate the Oct. 6 (1973) war victory, the same date he was killed (by assassins in 1981), I have to salute him.”

The former president also talked about the June 1967 Six-Day War, which he argued was not actually a war.

“We were hit without prior notice and without having a plan,” he said. “I believe I was in an operation center in mid-May and I returned to the airport where they informed me that there was a state of emergency had been announced.

“A commissioner from the General Command came on June 3 and said that there was a political demonstration and we would send troops to Sinai. The division’s leader had no idea who was getting in and out.”

Mubarak’s son Alaa had earlier posted a message to his Twitter account announcing the video featuring his father. “President Mubarak remembers some October War memories…tonight at 8.30 p.m,” he wrote.

Mubarak, who was deposed following an uprising in 2011 after almost 30 years as Egyptian President, was last seen publicly on December 26, 2018, when he testified at the trial of his ousted successor, Mohammed Morsi, and others.