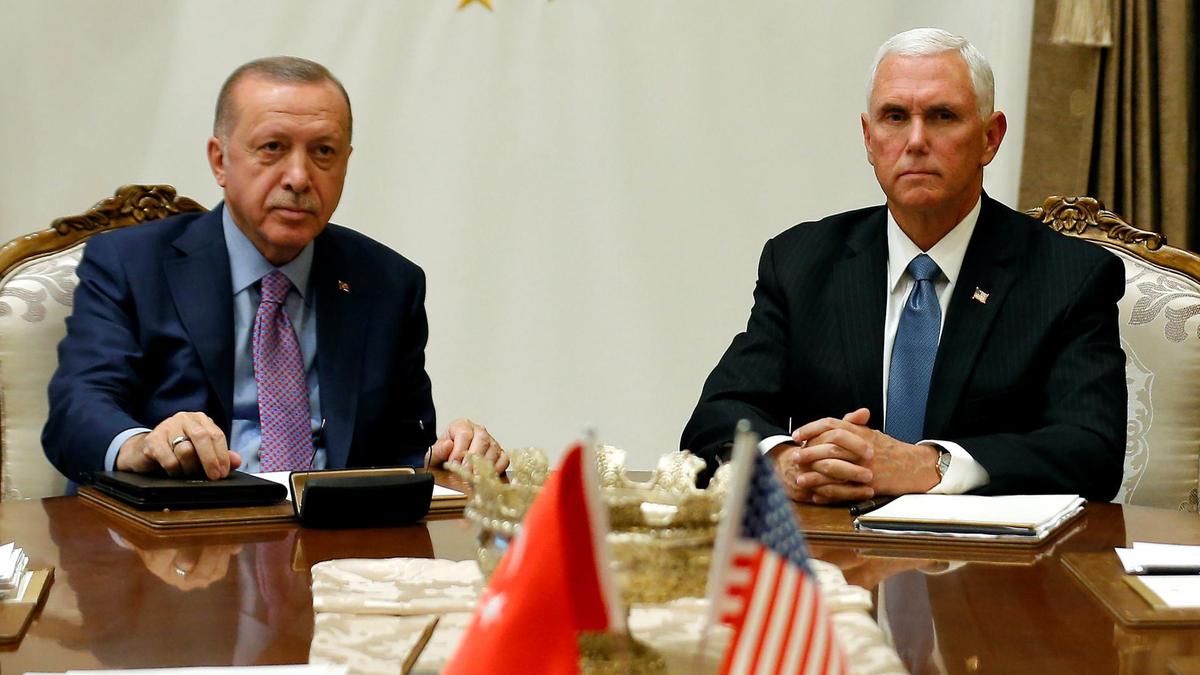 Turkey agreed on Thursday to pause its offensive in Syria for five days to let Kurdish forces withdraw from a "safe zone" Ankara had sought to capture, in a deal hailed by the Trump administration and cast by Turkey as a complete victory.
Mr Pence made the announcement after more than four hours of talks at the presidential palace in Ankara, and was praised by President Donald Trump, who said it would save "millions of lives".
He said Turkey would pause "Operation Peace Spring" for 120 hours to let Kurdish troops pull out.
"The safe zone will be primarily enforced by the Turkish Armed Forces," a joint US-Turkish statement released after the talks said.
Mr Pence said the US was already working with the Kurds, including the Syrian Democratic Forces, to arrange the withdrawal.
They will withdraw to about 32 kilometres south of the border with Turkey, he said.
Kurdish politician Aldar Xelil said he welcomed an end to the fighting.
Mr Xelil said the Kurds would abide by the ceasefire but defend themselves if attacked.
A spokesman for UN Secretary General Antonio Guterres said: “The secretary general welcomes any effort to de-escalate the situation and protect civilians, in line with the UN Charter and international humanitarian law.
"The secretary general recognises that there is still a long way to go for an effective solution to the crisis in Syria."
Turkey's operation "will be halted entirely on completion" of the pullout, Mr Pence said.
He said that as part of the agreement, no additional US sanctions would be imposed on Turkey and Washington would withdraw existing sanctions if a permanent ceasefire took effect after the five days.
Failure to reach an accord on Thursday would have resulted in new penalties, Mr Pence said.
"We are suspending the operation, not halting it," Turkey's Foreign Minister Mevlut Cavusoglu said in Ankara. "We will halt the operation only after [Kurdish militants] completely withdraw from the region."
The countries have also made an agreement to co-ordinate efforts on ISIS detainees and internally displaced people.
Donald Trump tweeted before the press conference, saying "millions of lives" would be saved due to the deal.

After the deal was announced, US President Donald Trump tweeted that "tough love" had been needed to secure it.
The Turkish assault has created a new humanitarian crisis in Syria with 200,000 civilians fleeing, a security alert over thousands of ISIS fighters abandoned in Kurdish jails and a political storm at home for Mr Trump.
He has been accused of abandoning Kurdish-led fighters, Washington's main partners in the battle against ISIS in Syria, by withdrawing troops from the border as Ankara launched its offensive on October 9.
Mr Trump defended his move on Wednesday as "strategically brilliant".
He said he thought Mr Pence and Mr Erdogan would have a successful meeting, but warned of sanctions and tariffs that "will be devastating to Turkey's economy" if not.
Print Whats APP Twitter Facebook LinkedIn