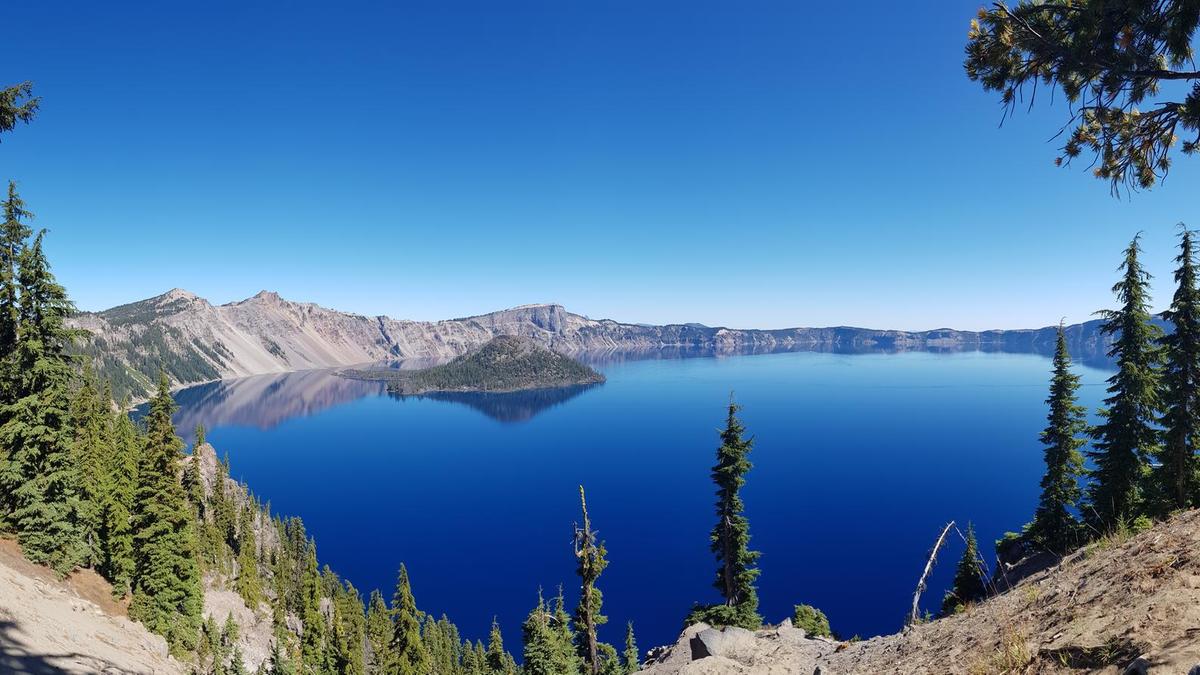 The haze had cleared. After almost six weeks of late summer wildfires, the smoke from tens of thousands of burning hectares in northern California and southern Oregon had finally retreated. I had no time to waste in getting to Crater Lake National Park, a four-hour, 375-kilometre drive south from Portland.

In a state overflowing with natural beauty, Crater Lake, a giant volcanic caldera filled with water, is surprisingly Oregon’s only national park – and its sheer isolation keeps overwhelming crowds at bay. The almost 80,937-hectare park is surrounded by seven other vast wildernesses, including the Sky Lakes Wilderness and Umpqua and Rogue River National Forests.

After hastily booking a hotel in Klamath Falls, an hour south of the national park, I head south on the 1-5 motorway, stopping only once for a slice of pizza before switching to Route 58 east through the mountainous Willamette National Forest and then south again on Route 97. Pristine forests, alpine lakes and the drier, flatter surrounds of the road to California offer plenty to counteract boredom, but a wave of excitement will pass through anyone who, even from a distance, sees Crater Lake under a clear blue sky. 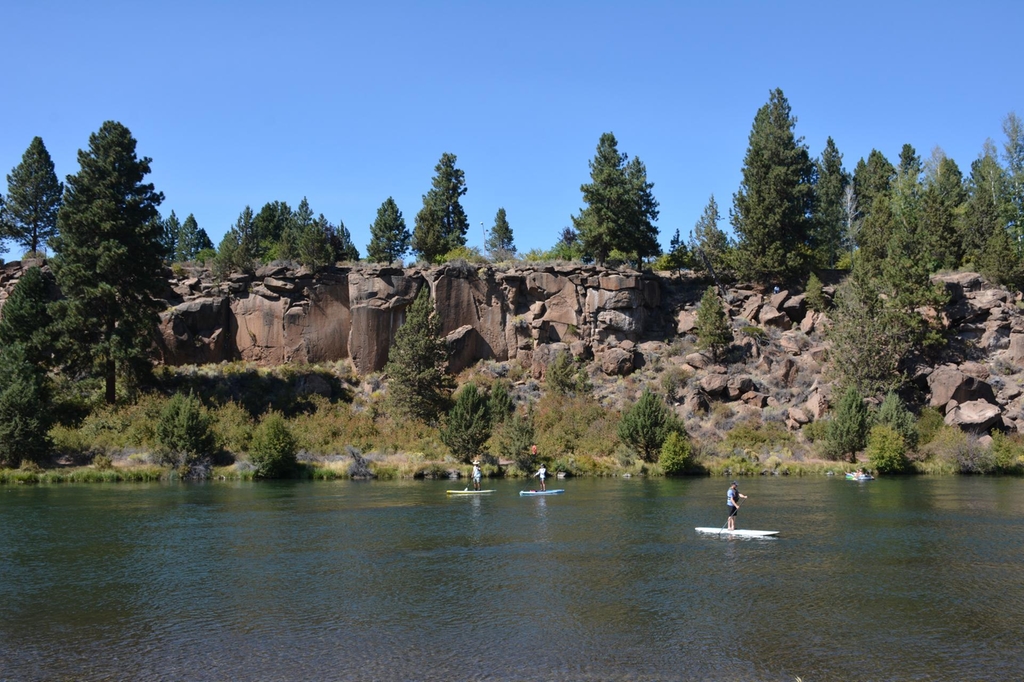 Like ice in the craters of the Moon, the blue water is otherworldly, a mirage seemingly connected more to heaven than to Earth.
Klamath Falls, a useful hub with an attractive old town but tainted by ugly strips of moth-eaten motels and suburban shopping, is where I spend the night.

I’m at the park gates first thing the following morning and, while some visitors merely park their car at the historic Crater Lake Lodge, get a picture and have lunch, it would be a huge shame not to set out to complete a full loop of the 53km rim that encircles the lake, about 2,500 metres above the water level.

For one thing, the National Park Service couldn’t make it simpler, providing easy-to-read maps, instructions and suggested highlights. The Rim Drive features more than 30 optional pullouts offering dramatic views of the park’s volcanic scenery, with views 10km across the lake on one side and high volcanic plateaus on the other.

This is one of the world’s most scenic drives, and for me, it’s one of the most ­potentially dangerous, not so much because of the unstable banks of the rim edge, but because the indigo blue of the lake is so mesmerising.

Since I want to see everything, I stop about 10 times on my way clockwise around the lake, walking along the cliff edges to get the best views and, at Cleetwood Cove on the northern side, hiking all the way down to the shoreline (3.5km down and back up). It’s a hot summer day and on my descent I inhale the fresh pine-scented air and think about swimming.

The water in the lake has no streams flowing into or out of it, and its relatively stable level is sustained entirely by a balance of rain and snowfall and constant seepage and evaporation. The colour is down to the depth – the lake is so deep (at 600 metres, it is the deepest and cleanest in the United States) that every other colour is absorbed and only the deepest blue light gets scattered back to the surface.
The water is bracing, but it’s the perfect antidote to the driving, the heat and the hike. I jump in and swim, along with dozens of other visitors, before drying off by the rocks and hiking back up the steep hill (the jolt of the swim and the mineral hit make this easier, too).

For sunset, I join about 30 visitors on an organised guided walk up to the Watchman ­Overlook on the western side, another uphill hike offering views from a height of 2,442 metres. By the time I drive out of the park, the Moon is rising and the sky is filled with stars, meteors, satellites and yes, other planets that at this moment feel closer to where I am than where I’m going.

Departing the area the following day, I can’t resist a slight detour (but less than an hour from Crater Lake) into the Umpqua National Forest, where the Umpqua Hot Springs are just another one of hundreds of volcanic sites in this north-south chain of mountains known as the Cascade Range Volcanoes (most of which, incidentally, could still erupt again at any moment).

At the trailhead, I park the car and walk across a footbridge over the North Umpqua River and up the steep hill to the springs, which are laid out on a scenic natural terrace over the river. The first pool is scalding hot and occupied by a family of Kazakhstanis, and each one gets progressively cooler as I work my way down. I convince a French tourist that we should use the conveniently placed rope to investigate a soaking pool in a cave right beside the river; it’s worth it.

Muddy, but not dirty, I drive east and north to Bend, a two-hour and 20-minute drive back to civilisation. Bend, a small city of 100,000 on the Deschutes River, is now trendy and filled with young professionals who want to embrace the outdoors at every available spare moment.

Close to the Mount Bachelor ski areas and the whole (and much drier) eastern side of the Cascades, with mountain biking, hiking and rock-climbing for when it’s not snowing, Bend is something of a mini Portland but is in some ways more refined. The centre resembles London’s Richmond or Twickenham, with Victorian-style parklands on both sides of the river, strolling couples, ducks on the water, expensive, old-style riverfront homes and downtown dining to match.

At the southern end of town, however, Bend’s reputation as an active lifestyle destination is demonstrated. Here, in summer, the slow-­moving river is filled with locals paddleboarding, kayaking and floating along in inflatables. I walk along both sides of the well-kept, ­wildflower-filled riverside, through the Bend Whitewater Park, the Old Mill District and the appropriately named Riverbend Park.

Heading north from Bend, it’s of course not long – 35 minutes to be exact – before I encounter another embarrassment of riches. Smith Rock State Park, a world-class climbing destination and a staggeringly beautiful canyon on the Crooked River, is worth seeing even if you don’t climb. I follow the hiking trail down to and across the river, and come back the same way.

Google reviews give this place a 4.9 out of 5 average, and I find nothing not to like. Sun, nature, solitude and cinematic beauty yet again make the $5 (Dh18) all-day parking voucher the best value any city-­dweller could ask for. I drive across the ­plateau back to Mount Hood and then Portland, and I’m suddenly thinking about buying a camper van.