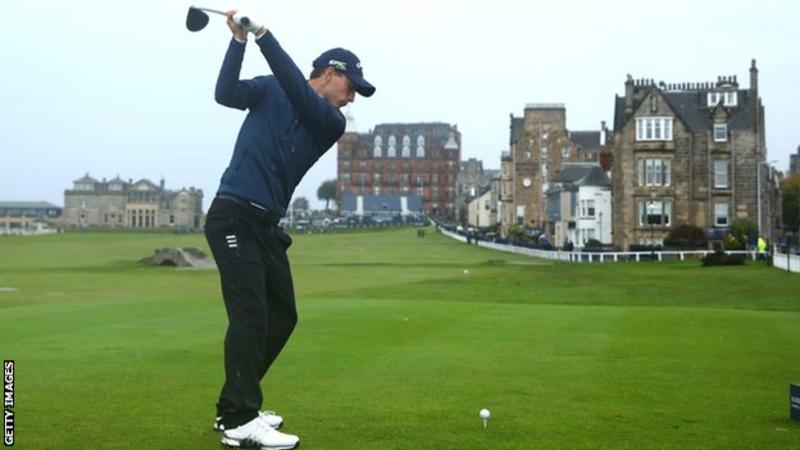 England's Matthew Jordan says a landmark 59 "did cross my mind" during his surge to a one-shot lead at the Alfred Dunhill Links Championship.
Jordan was on track for only the second sub-60 score on the European Tour after covering the front nine of St Andrews' Old Course in just 29 shots.
But he settled for an eight-under-par 64 for a halfway total of 14 under.
Fellow Challenge Tour pro, Scotland's Calum Hill, is tied second with Matthew Southgate and Joakim Lagergren.
"I had my friends here and they were quick to tell me that they wanted the same on the back nine," said 23-year-old Jordan, who holed an eagle on the third followed by five straight birdies.
"It was in my head but really I knew the rain was coming in as well."
Dunhill Links scorecard
Walters leads as Rose & Timberlake struggle
Ramsay has Race to Dubai belief
Jordan turned professional a year ago after a stellar amateur career that saw him reach fifth in the world rankings, claim a nine-shot victory in the Lytham Trophy and also win the St Andrews Links Trophy in 2017.

Victory on the Challenge Tour in Italy at the end of June earned Jordan £43,000 and means he is on course to earn his European Tour card for next season.
However, all that and more will be taken care of if the world number 292 from Hoylake can lift the title on Sunday and claim the first prize of £650,000.
"I had one more invite and I absolutely love this place," he added. "I'll try to make the most of it now I'm in this position."

Hill's two victories on the Challenge Tour this season have effectively secured his promotion to the European Tour, but the 24-year-old Scot knows he and Jordan face the toughest course in round three.
"Whatever my position right now, it's probably slightly higher than those that have started on Carnoustie," Hill said after a bogey-free 65 at St Andrews.

Swede Lagergren's 62 at Kingsbarns was the lowest round of the day, with Justin Rose having to settle for a 64 at the same venue after covering the front nine in just 28 strokes with six birdies and an eagle.
Rose stumbled on the back nine with a double bogey on the 11th, but ended the day just two shots off the lead, alongside compatriot Jordan Smith and Scottish pair Russell Knox and Richie Ramsay.
"I was aware I was going low but was super relaxed," said Rose, "Sometimes you can get in your own way when you're on a really good run."

World number two Rory McIlroy is six shots off the lead after a 66 at Kinsgbarns.