The pandemic has turned many of us to technology as a way to connect with not just other people, but also nature.

Camera traps—stationary cameras such as trail cams that capture still images or video of animals that cross their path—are increasingly popular windows into the everyday lives of birds, mammals, insects and more.

"Camera traps on the ground have been used for a long time, but arboreal camera traps are a newer approach. They capture what is going on at the level of the tree canopy," said Moore, a post-doctoral associate in the UF/IFAS department of wildlife ecology and conservation.

A canopy-level view is invaluable to wildlife researchers who study animal species that spend their lives in the trees.

"Sometimes we may not even know a species is in an area until we catch them on camera up in the trees," said Moore, whose recent research focuses on wildlife conservation in Rwanda's national parks. 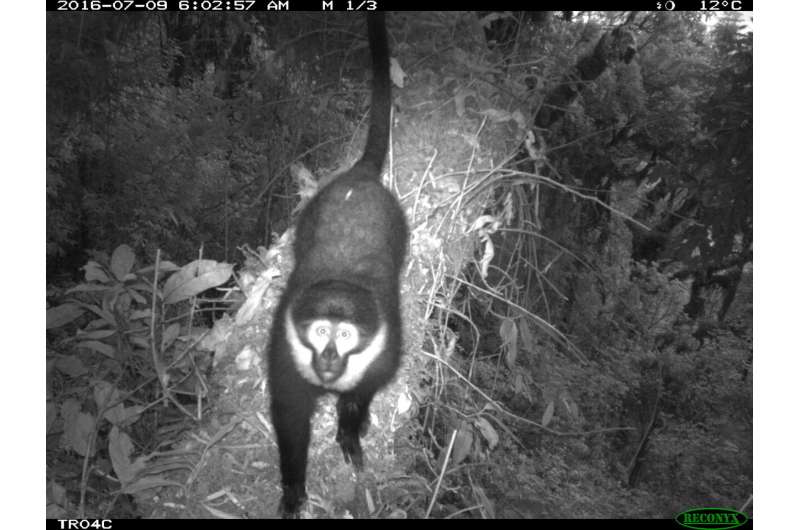 "And you can't conserve what you don't know is there," Moore added.

Looking back through the scientific literature, the study's authors found that wildlife researchers have been using arboreal camera traps for about the last 30 years, though their use has increased dramatically in recent years.

"The growth has been exponential," said Tremaine Gregory, a conservation biologist at the Smithsonian Conservation Biology Institute's Center for Conservation and Sustainability, and a co-author on the study.

"There are many advantages to arboreal camera traps. For one, they allow us to see wildlife that would be nearly impossible to see if you're on the ground looking up, even with binoculars," Gregory said. "They are also less invasive than the traditional method of surveying wildlife, which is to walk through the habitat on transects. Finally, they allow us to more effectively document wildlife at night, and so many animals that live up in the trees are nocturnal."

But as with many innovations, camera trapping has a steep learning curve, the study's authors say.

"Camera traps offer a lot of advantages, but there are some common mistakes people make. In our study, we lay out some best practices to help researchers avoid those pitfalls," Moore said.

The study's 18 authors also provide unique mini-guides that provide guidance on topics specific to arboreal camera trapping such as ways to mount cameras to managing interference from animals in the canopy. The mini-guides also cover best practices for installing cameras up in trees safely.

"These best practices could also be useful for nature lovers interested in putting a camera trap in their backyards," Gregory added.

Some of the earliest uses of camera traps in urban areas were nest cams trained on nests of species like ospreys, which are often built on the tops of high urban structures. Today, sites like YouTube are full of live camera feeds showing animals in their most candid moments.

"Camera traps are a great tool for increasing public awareness about the environment and conservation efforts," Moore said.

The study is published in the journal Methods in Ecology and Evolution.