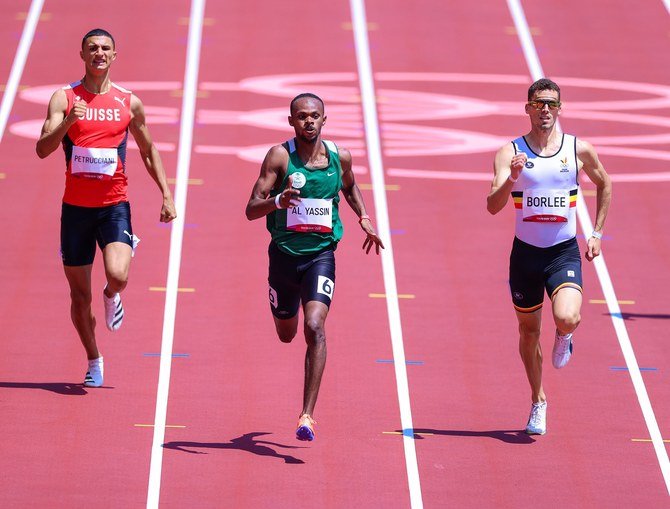 Runner Mazen Al-Yassin has produced off one of the Saudi Arabian delegation’s best performances at Tokyo 2020 by winning his race in the Men’s 400m competition at the Olympic Stadium on Sunday morning.

A personal best time of 45.16 in  saw him finish ahead of Kevin Borlee of Belgium and Ricky Petrucciani of Switzerland.

The 25-year-old will now be aiming for what would be a glorious appearance at Thursday’s final when he takes part in Monday morning semifinals, starting from 2.05am Saudi Arabian time.

Al-Yassin received the call up to the Olympics on July 2, and headed to Tokyo after eight years of consistent participation at 400m behind him.

He represented Saudi Arabia at the 2013 World Youth Championships in Ukraine, and that same year he won gold at the 4x400m relay at the Islamic Solidarity Games in Indonesia, and silver at in the individual 400m at the Asian Junior Games in Taiwan.

In 2015 another silver followed with Saudi in the 4x400m relay at the Asian Games in China.

In 2017, Al-Yassin’s personal best would show rapid improvement as shown with silver in the individual 400m race at the Arab Championships in Tunisia, and bronze in the relay. The same year grabbed another silver at the Asian Indoor and Martial Arts Games in Turkmenistan.