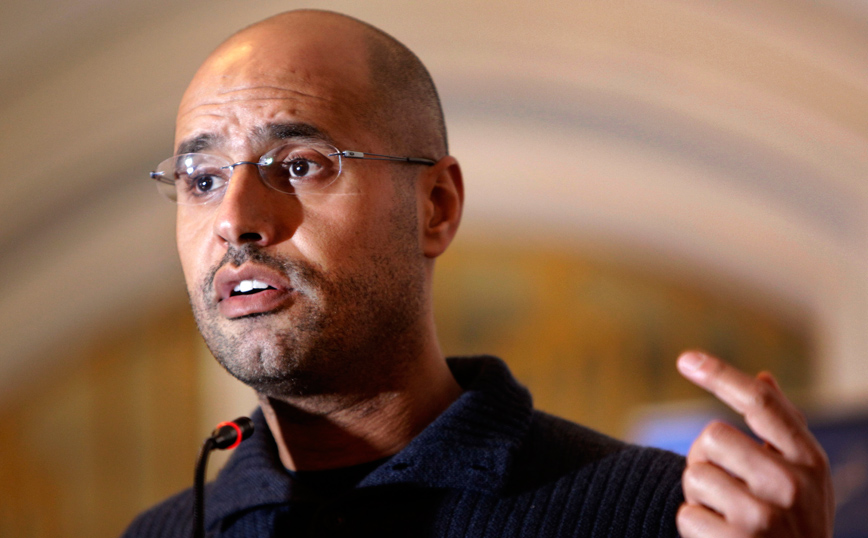 Seif Al-Islam, the son of slain leader Muammer Qaddafi, wants to “restore the lost unity” of Libya after a decade of chaos and does not exclude standing for the presidency.
He spoke in a rare interview, given to the New York Times at an opulent two-story villa inside a gated compound at Zintan in the west of the North African country.
For years, mystery had surrounded the precise whereabouts of a man wanted for war crimes by the International Criminal Court (ICC).
The 49-year-old, who before 2011 had been seen as his father’s presumed successor, said politicians in the decade since have brought Libyans “nothing but misery.”
“It is time for a return to the past. The country — it’s on its knees ... There’s no money, no security. There’s no life here,” Seif Al-Islam said in his first appearance in years.
After four decades in power, Muammer Qaddafi and his relatives were the target of a popular uprising in 2011.
Three of the dictator’s seven sons were killed, but the fate of Seif Al-Islam was unknown.
He was captured by a Libyan militia in November 2011, days after his father was killed.
Four years later, a Tripoli court sentenced him in absentia to death for crimes committed during the revolt.
The ICC has repeatedly asked for him to be handed over for trial.
Until the interview, Seif Al-Islam had not been seen or heard from since June 2014, when he appeared via video link from Zintan during his trial by the Tripoli court.
Seif Al-Islam said in the interview that he was a free man organizing a political return, and that his former captors “are now my friends.”
He told the paper the militiamen eventually realized he could be a powerful ally.
In recent years, Libya has been split between two rival administrations backed by foreign forces and countless militias.
In October, after forces of the Tripoli-based Government of National Accord (GNA) routed those of eastern military strongman Khalifa Haftar, the two camps agreed a cease-fire in Geneva.
The security situation has been slowly improving since.
A provisional government was agreed in March, and general elections are expected to take place on December 24.
Any possible return by Seif Al-Islam to Libyan politics would face hurdles, including his conviction by the Tripoli court and the ICC warrant for his arrest.
But the Britain-educated son of Muammer Qaddafi seems undeterred, according to the New York Times.
Seif Al-Islam said “he was confident that these legal issues could be negotiated away if a majority of the Libyan people choose him as their leader.”
The paper quoted him as saying: “I’ve been away from the Libyan people for 10 years. You need to come back slowly, slowly. Like a striptease. You need to play with their minds a little.”
Asked if it felt strange to seek shelter in Libyan homes when he was on the run in 2011, he was as enigmatic as some of the opinions expressed in his late father’s ‘Green Book’.
“We’re like fish, and the Libyan people are like a sea for us,” Seif Al-Islam replied.
“Without them, we die. That’s where we get support. We hide here. We fight here. We get support from there. The Libyan people are our ocean.”

The chairman of the Presidential Council of Libya

Libya's Haftar steps down from military role to run for president