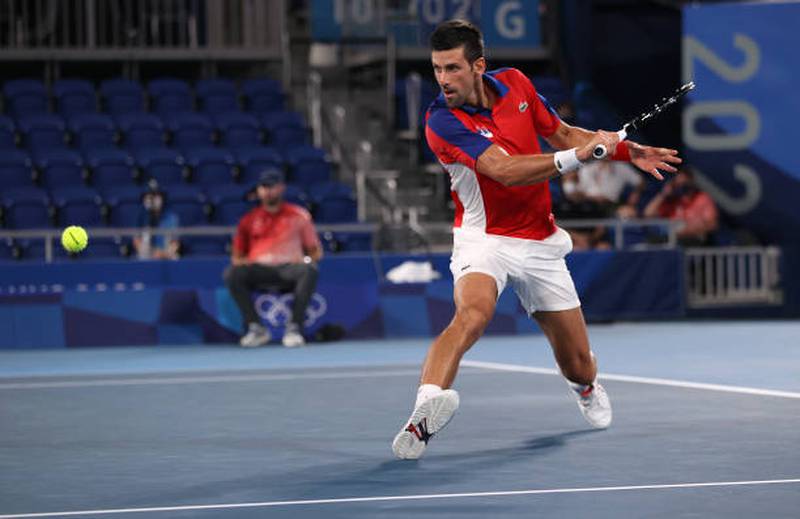 Novak Djokovic warned his remaining rivals in Tokyo that he is "getting better and better" after a statement win over Japan's Kei Nishikori in the Olympic quarter-finals on Thursday took him a step closer to the golden Grand Slam while dashing the hopes of the host nation.

Djokovic, 34, was on another level to former world No 4 Nishikori, racing to a 6-2, 6-0 victory in just 72 minutes. He will face Germany's Alexander Zverev for a place in the finla after the fifth seed delivered his own emphatic victory, beating France's Jeremy Chardy 6-4, 6-1.

“He was defending amazing today — everything deep — and I was trying to stay with him but I couldn’t,” Nishikori said. “I thought I was playing OK but my serving was bad today and he was attacking every (time).”

The dominant performance advanced Djokovic into the medal rounds and — more importantly — moved him one step closer to finishing off this segment of his golden Slam bid. The reigning Australian Open, Roland Garros, and Wimbledon champion is aiming to become the first male player to win all four majors and Olympic gold in the same season. The feat has been achieved only once before, by Germany's Steffi Graf in 1988.

As it has appeared for months, it seems that Djokovic, who has not dropped a set in the tournament, is getting better match by match — so much so that it looks like he’s hardly being tested.

“Matches are not getting easier but my level of tennis is getting better and better and and I’ve done that so many times in my career,” Djokovic said. “I’m the kind of player that the further the tournament goes the better I’m feeling on the court and that’s the case here.”

Djokovic added that it was his “best performance” of the tournament. “Against a very good opponent,” he said. ”I felt like I had an answer for everything he had.”

Djokovic's hopes of winning gold were given a significant boost when second seed Daniil Medvedev of the Russian Olympic Committee slumped to a shock defeat in his quarter-final to Spain's Pablo Carreno Busta.

On a day when matches started later than previous rounds to combat the heat and humidity - Medvedev had been the most outspoken critic of matches being staged in the middle of the day - the Russian bowed out in a 6-2 7-6 loss.

"Daniil is a really good player, he's very solid from the baseline," said the world No 11 Carreno Busta. "I think I returned very well all the time. That's very important when you play against these kind of players."

The Spaniard will face Medvedev's teammate Karen Khachanov after he came through a tough battle against France's Ugo Humbert 7-6, 4-6, 6-3.

Standing in front of her in Saturday's title match will be Czech Marketa Vondrousova, who knocked out Ukrainian Elina Svitolina 6-3 6-1 in a one-sided contest.

"I mean my emotions right now are too high. To have the medal, for me it's the greatest thing ever," Bencic, 24, said. "To be here as an athlete, for the Olympics, it's amazing and also to have a medal, it's something I dreamt off and I didn't think it will become reality."