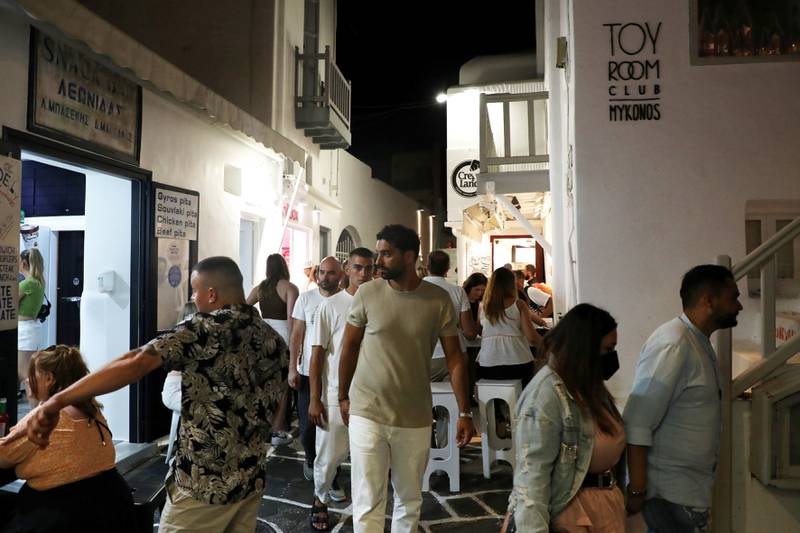 Greece has sent additional police to popular tourist destinations including the islands of Mykonos and Ios amid a surge in Covid infections blamed on the Delta variant.

Officials are worried about local businesses who do not adhere to virus-related restrictions during the summer tourist season peak.

Greek officials have warned that they are considering imposing tighter restrictions on Mykonos and Ios.

“The Delta variant has meant that every country is dealing with the fourth wave now and not as expected in November,” Greek tourism minister Harry Theoharis told the Guardian. “While hotels and family-type venues are implementing protocols diligently, there’s more congestion than we would like to see in bars, especially among the younger crowd … so we are trying to ensure some balance is kept.”

On Mykonos, the number of police sent to the island has tripled compared to last year at the same time to 186.

Mr Theoharis said tourism-related revenue surged by 400 per cent in June compared to the same time in 2020.

“We have made up for some lost ground … around 140,000 visitors from the UK have flown in since 19 July. They are coming in big numbers though there is still some way to go. Britain is an important market.”

In May, the UAE and Greece agreed to a travel corridor. It means that vaccinated passengers do not have to quarantine in either country on arrival.

More than five million people in Greece have been vaccinated from Covid-19.

“We’re seeing a fourth wave but no wave at all in terms of hospitalisations and stress on the health system,” Mr Theoharis said. “There is a shift in the pattern of the disease and that requires a shift in mindset as to how we respond to it.”