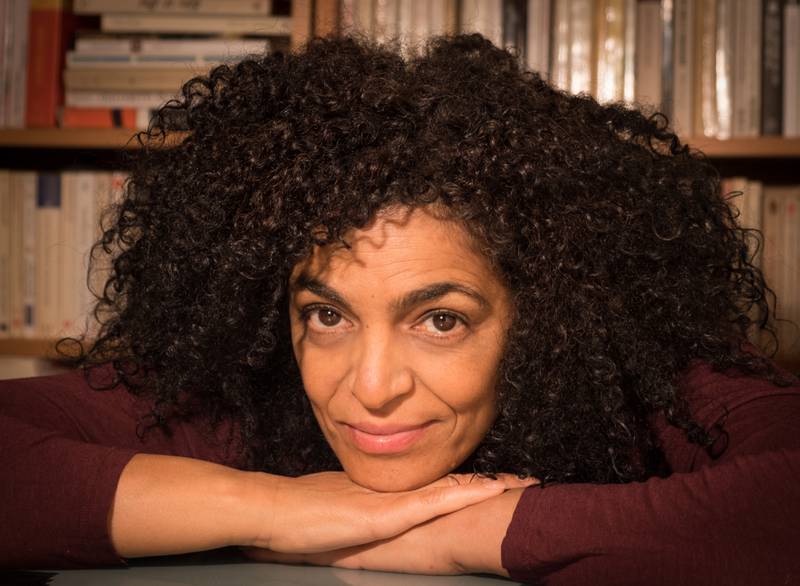 “There’s no such thing as monsters. Only humans.” That’s how French-Algerian author, playwright, actress and sometime cleaner Samira Sedira began to process the real-life mass murder of a family of five in a small French mountain village – by a seemingly "normal" person who not only knew his victims but counted them as friends.

“The details were terrifying,” she tells The National. “I did a lot of research; I read, watched, listened to a lot of things about the event, almost everything that existed.”

For her new novel, People Like Them, first published last year to great Francophone acclaim as Des Gens Comme Eux, Sedira wasn’t interested in a faithful reconstruction. What fascinated her about this tale was that at the time of the murders, race was not mentioned.

One of the real-life victims, with his flashy cars and plans for an expensive house, was black, living in a village that had always been entirely white. In the novel, Bakary is enigmatic, generous, alluring and, it transpires, desperate to maintain his status.

“What really attracted me to my story was the intersection of racial and class conflict,” Sedira says. “It’s complex, unusual. The patterns and the stereotypes are switched: here, the black man is powerful and the white man is submissive. The victim is a crook and the murderer a victim. What is fascinating to observe is how this disorganisation led to tragedy, how this kind of configuration can be intolerable for people.”

So People Like Them is not so much a whodunnit – the second chapter has the murderer’s wife recounting the courtroom trial – as a whydunnit. What drives the character Constant to commit such a heinous act is what this taut and insightful novel is really concerned with; a combination of failure (Constant’s hugely promising athletic career is cut short by injury), jealousy, resentment and plain fear of disruption; the "other".

“As a novelist, I have always been fascinated by failure, rupture, the ‘wound’,” says Sedira. “It is the essence of our humanity. It touches me deeply because it is proof that we are vulnerable. That failure is at the origin of every myth and every story in the world: in an orderly world, one day something breaks the course of things.”

If there is a turning point for Constant, it’s perhaps when his wife takes on a cleaning job at Bakary’s house. Even though she asks for the role, it’s another reminder for him that the normal "order" has been reversed.

This section of the book is based on Sedira’s own experience. At the age of 44 and on the heels of a rich acting career, she was compelled by financial reasons to clean houses for three years.

“I found myself outside my usual circle and I noticed that people looked at me differently,” she says. “In fact, they didn't really look at me at all. Acting is the opposite. Everything is based on the image. You are constantly being watched and listened to.

"I had moved from visible to invisible and it was very disconcerting. And yet I had remained the same. I had just changed jobs. It's terrible to be defined only by the job you do and to have value only if it is 'attractive'.”

The most difficult thing for Sedira to process, however, was that it put her in the same economic situation as her parents, immigrants from Algeria who arrived in France in the 1960s and “only had access to the hardest jobs”. It felt to her that she was failing their expectations.

“I suffered from it, but I also felt comforted by it; I could understand what they had been through.”

It’s what makes People Like Them so much more than a story of mass murder. The title is taken from a conversation two people have about Bakary’s family – "why would people like them deliberately choose to live in a village like ours?" – and embedded in this story are all the traumas of colonialism, prejudice, white privilege and the immigrant experience repeated the world over.

“Racism in France is deeply rooted,” says Sedira. “It is based on institutions, practices, speeches and representations that were developed within the framework of the French colonial empire. It cannot be denied that there is a stronger and more enduring form of specific rejection and contempt for immigrants from colonised countries. For example, between Algeria and France, relations are complex, often filled with resentment and unspoken words."

Sedira left Algeria for France when she was a child, and those resentments she experienced were directed explicitly at her parents, rather than her.

Now, she thinks that was more formative than she realised at the time. For second-generation immigrants, she says, there is a “desire for reparation and a hunger for recognition".

"This is what we are made of,” she says.

Maybe that’s why she felt the retreat from a successful acting and writing career so keenly, and why Bakary acts the way he does in his final, desperate attempt to prove his worth. Sedira certainly believes that her fiction – in fact, all fiction – is in some way autobiographical.

“By telling stories, I’m also talking about myself and the questions that concern me; identity, class relations, social invisibility,” she says. “But I'm also very attached to the writing. It is crucial. The power of words, their accuracy, their resonance.”

Which is why, ultimately, People Like them is both embracing and unsettling, shocking yet hugely thought-provoking, beautifully written, rather than sensationalist.

“No-one wants to be moved by a murderer,” Sedira says. “It’s immoral and I’m sure some readers will resent me for putting them in that situation. But I'm not trying to take sides or give justice; it’s an obstacle to an understanding of the world.

“To search, question, upset is the work of every artist. You cannot discover something if you are not subversive.”

A Minute With: Guitarist Noel Hogan on The Cranberries New Book