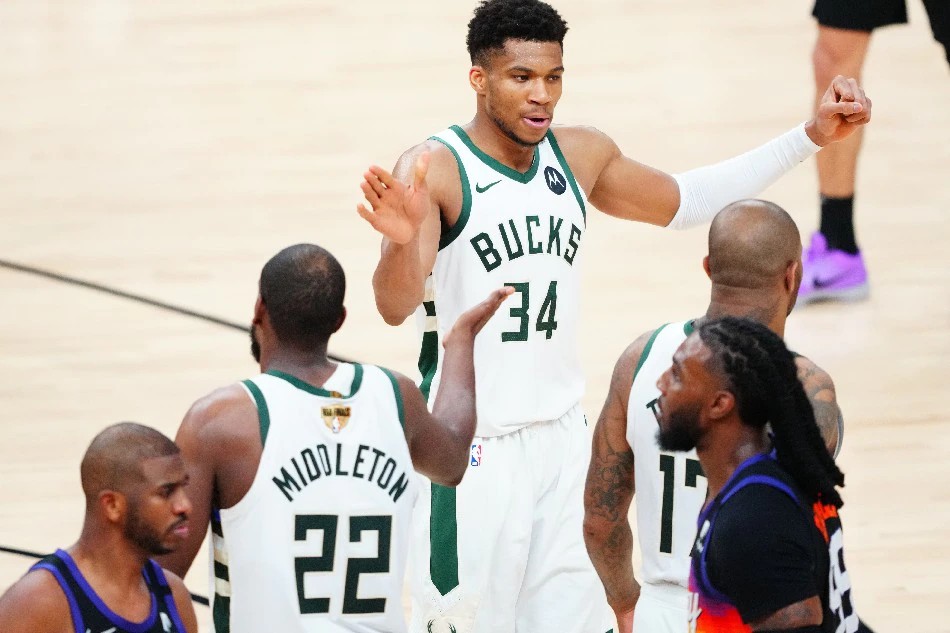 Overcoming a language barrier and roller-coaster playoff emotions have helped Milwaukee Bucks star Giannis Antetokounmpo move one victory shy of his dream of capturing an NBA crown.
The 26-year-old Greek forward has sparked the Bucks to a 3-2 edge in the best-of-seven NBA Finals with game six on Tuesday at Milwaukee.
Antetokounmpo, a two-time NBA Most Valuable Player, has become a vocal leader on a club where he once feared to speak up after arriving from Europe in 2013.
“Early in my career I was really quiet and with the language barrier it was harder for me. I felt like I’ll say the wrong thing, I’ll say something stupid, so I just chose not to talk at all,” Antetokounmpo recalled Monday.
“But now it’s a little bit easier for me. I realized I would rather say something stupid than not say nothing at all.”
Teammates such as Khris Middleton and P.J. Tucker have encouraged him to speak out even as his skills have evolved, from Most Improved Player in 2017 when he led the NBA in points, rebounds, assists, steals and blocks to his MVP 2019 and 2020 campaigns.
“Throughout the journey, throughout my career, guys helped me, especially Khris. He was like, talk, talk, say something. And P.J., I’ve been with him for like two or three months. He’s pushing me to talk. I can get a lot better.”
Antetokounmpo has also learned how to manage his emotions after the Bucks had the NBA’s best record in 2019 and 2020 but endured playoff heartbreak, falling in 2019’s Eastern Conference finals after taking a 2-0 lead on Toronto then being upset by Miami last year.
“For sure. It helped me mature and grow and become more mentally tough,” he said. “One thing I’ve learned personally in the playoffs, I think early in my career I was getting too high, too low.
“We played a good game, I was so happy, because you feel the intensity from the crowd, the fans cheering and all that. I was getting too high, and maybe the loss I felt like it was the end of the world.
“This year, lose or win, that did not happen. I was the same kind of guy. I just live with whatever outcome comes because I believe that I’m supposed to be there in that time and place. So I don’t really worry about the outcome. We got to figure out a way to win and never get too high, never get too low.”

Bucks coach Mike Budenholzer has watched as Antetokounmpo has evolved on and off the court into the leader the Bucks have needed in their quest to end a 50-year title drought after reaching their first NBA Finals since 1974.
“The vocal leadership you’re seeing has been growing,” Budenholzer said. “Him just understanding how powerful and how impactful he is. Sometimes it’s being vocal. It’s maybe just helping teach or learn or grow in a moment.
“His understanding of what we want to do has grown. When you understand things better, you can communicate better. He’s got a high level of understanding of what we want to do both defensively and offensively.
“He’s got great passion, he’s got great commitment, he’s got great relationships with the players.”
Antetokounmpo feels a special bond as well.
“No matter how you it ends up, I’m really proud of this team, really proud of all the work we have put in,” he said.