why the classic Honda S800 makes for a worthy investment

The chap from Honda reverently, but with the not entirely inconsequential force required, slammed shut the door of his valuable ward. He held out the keys in my direction but then, as he took stock of the towering beanstalk that is yours truly, he hesitated, almost retracting his arm.

“You’re quite tall, aren’t you?” he astutely noted, “and this car is tiny." I quickly bridged the micro-chasm of space between my fingers and his halted hand, snapping away the keys before he could act upon his second thoughts. “You’re only the second journalist we’re letting drive this car since it was restored …” he said.

I politely but deliberately shoved past, reopened the door, plonked my behind on the neatly retrimmed little seats and gingerly folded my lanky legs into the compact compartment. Smugly I looked up at his still concerned gaze with a grin that said: “See? Fits perfectly.”

He finally seemed satisfied and so was I – I’d had my doubts about driving the hallowed but tiny classic roadster. Measuring 1.2 metres tall, 1.4 metres wide and 3.3 metres long, it's less than a metre and a half longer than I am tall. But drive it I would, even if I had to amputate a few feet, because I’d been waiting 35 years to get behind the wheel of a Honda S800.

I first saw one in the mid-1980s in a Honda dealership in London. It oozed feisty charm. Yes, it deliberately aped contemporary British roadsters of its era, such as the MGB, but there was a twinkle in its chromed headlights that hinted at something more.

A classic car if ever there were one

Debuting in 1965 at the Tokyo Motor Show, the S800 was the final evolution of the fledgling car manufacturer’s first series of sports cars and roadsters. Established as a motorbike maker, Honda had only started making cars two years prior.

Fewer than 12,000 examples of the S800 were born; only about 1,500 were sold in the UK, where fewer than 100 still exist. It’s no wonder the Honda chap was so anxious, especially after the company had clearly outlaid a bit to get this pup back into shape.

It is worth the investment, though; prices are rising steeply for this oft-overlooked wonder. In only two years, values have shot up by nearly 100 per cent, and best examples currently sit between $40,000 and $50,000.

Not only do I manage to get my legs in, but they’re also comfortably extended, albeit markedly skewed to the right. The disproportionately huge original wood-rimmed steering wheel almost sits in my lap. The smooth rim wears wide cracks and the glaze over the logoed hub is crazing. But the patina doesn’t extend to the dashboard, which has been flawlessly re-covered.

Through the thin spokes there’s a clear view of the evocative instruments, with the speed and rev counter directly ahead and the temperature, fuel gauge and amp-meter off the left. There’s a satisfying physicality to the toggle switches and push-pull levers that operate things such as the choke, lights and heating.

A slim rod on the left operates the indicators and a solitary, faint, blinking light alerts you when engaged – important that, because they don’t self-cancel.

The clutch is odd, heavy and stubbornly resistant at first. It’s only when you move off, having stalled on the first attempt, of course, that you realise it only needs slight pressure. The biting point is right at the top, somewhat indistinct, but soon becomes second nature. Its caretakers reveal it needs adjustment – filed under “next job on the list”. 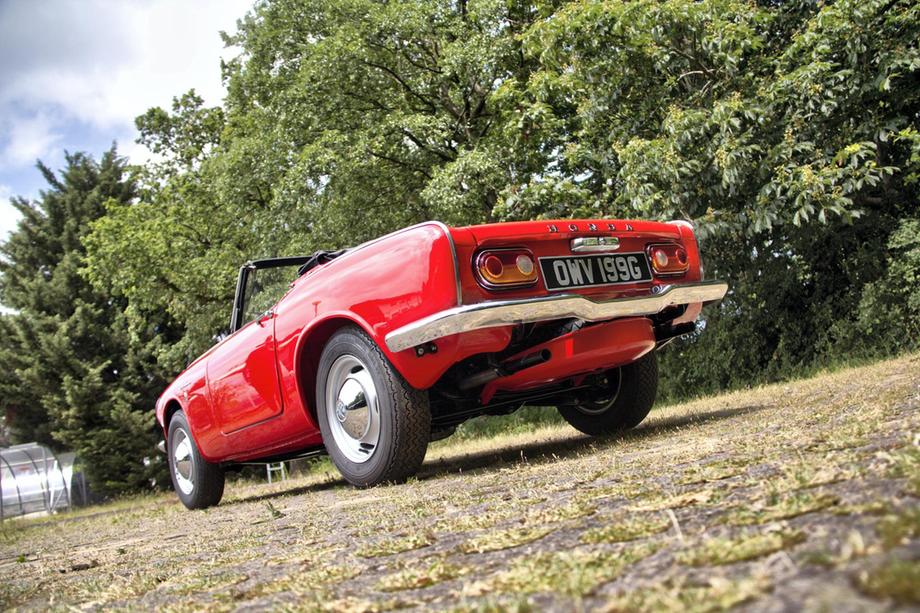 The brakes aren’t terrible as expected; they feel quite contemporary. A little extra effort is required, but they don’t struggle to stop the lightweight 771-kilogram S800. With just 70 brake horsepower and a minuscule 66.5Nm of torque on tap, it feels amazingly sprightly. And that’s not even using all of the revs originally offered.

The motorcycle-derived engine was meant to scream up to 10,000rpm. Sympathy for its veteran and valuable status means I barely use half of that. The motor clearly starts to come alive at under 4,000rpm.

The gear lever is like a switch, a small stalk with a baby bell pepper knob. It’s delightful to use, defining short-throw. There are only four speeds, yet there’s temptation to avoid using the top to keep the engine yelling. There’s a fair bit of play in the non-assisted steering, but it lightens on the go and proves responsive, accurate and feelsome. Plus, you can turn this thing on a dirham.

Naturally, there’s a lot of noise and vibration, and a rigid ride that amplifies every road imperfection. Beware: potholes will rattle your brain. The handling is exquisite, though: alert, quick-witted, grippy, neutral and, most importantly, fun. And that is the key thing here. Even below speed limits, you’re having an absolute blast. And once you’re accustomed to driving it, the S800 is easily conceivable as a daily driver.

All too soon, it’s time to hand it back. I feel regret at not having more time, but also exhilaration at realising the S800 truly was as thrilling a drive as the teenage me imagined it to be.