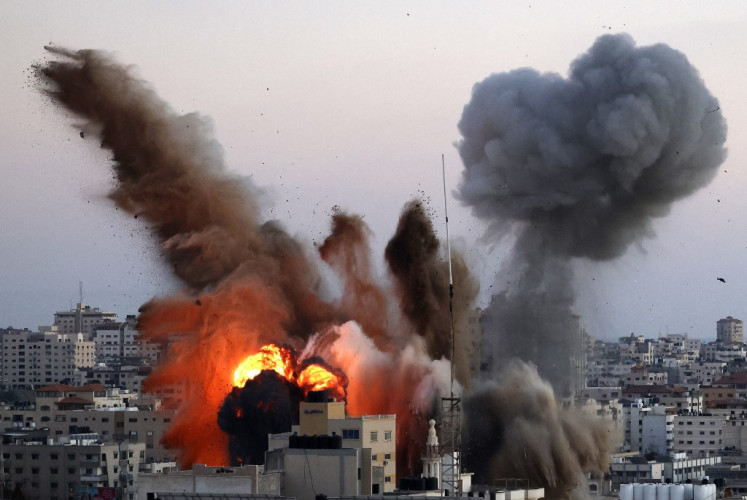 Malaysia and Indonesia on Saturday called on the UN Security Council to intervene and stop Israel’s strikes on Gaza, as the conflict between Israeli forces and Palestinian militants raged on.

“We were of similar views that the international community, especially the United Nations Security Council, should act swiftly to cease all forms of violence committed by Israel, and save the lives of Palestinians,” Muhyiddin said in a televised address.

“To date, the UN Security Council has not issued any statement on the current situation in Palestine due to opposition from the United States of America,” he said.

Malaysia has long been a staunch supporter of the Palestinian cause, pushing for a two-state solution based on pre-1967 borders.

The Security Council will publicly discuss the worsening violence on Sunday, diplomats said this week. The 15-member council has met privately this week about the worst hostilities in the region in years, but has so far been unable to agree on a public statement, diplomats said.

Iran’s foreign minister canceled a visit with his Austrian counterpart to show displeasure that Chancellor Sebastian Kurz’s government had flown the Israeli flag in Vienna in a show of solidarity, the Austrian Foreign Ministry said on Saturday.

Iranian Foreign Minister Mohammad Javad Zarif was supposed to meet Alexander Schallenberg but had called off the trip, a spokeswoman for Schallenberg said, confirming a report in newspaper Die Presse.

“We regret this and take note of it, but for us it is as clear as day that when Hamas fires more than 2,000 rockets at civilian targets in Israel then we will not remain silent,” the spokeswoman said.

In Tehran, Foreign Ministry spokesman Saeed Khatibzadeh told the semi-official news agency ISNA: “Mr. Zarif did not consider the trip beneficial in these circumstances, and therefore the travel arrangements were not finalized.”

The dispute comes during talks in Vienna to try to revive a 2015 accord with western powers in which Iran agreed to curb its nuclear program in exchange for relief from sanctions.

Morocco’s King Mohammed VI has ordered 40 tons of aid for Palestinians to be shipped to the West Bank and Gaza following recent violence.

The aid includes food, medicine and blankets and will be carried by military aircraft, the Foreign Ministry said in a statement.

Morocco also denounced “the violent acts perpetrated in occupied Palestinian territories,” and reiterated support for a two-state solution to the Israeli-Palestinian conflict.

Morocco resumed ties with Israel in December as part of a deal brokered by the US that also includes Washington’s recognition of Moroccan sovereignty over Western Sahara.

Egypt “exceptionally opened the Rafah crossing to allow 10 Egyptian ambulances into the Gaza Strip to transport wounded Palestinians ... to be treated in Egypt,” a medical official said.

The grand imam of Egypt’s Al-Azhar mosque and university, Sheikh Ahmed Al-Tayeb, has launched a campaign on social media in “support the Palestinian people.” Stop the killing, he said.

“Enough with silence and double standards if we are really working toward peace.”

Turkey agrees to secure Kabul airport if conditions are met