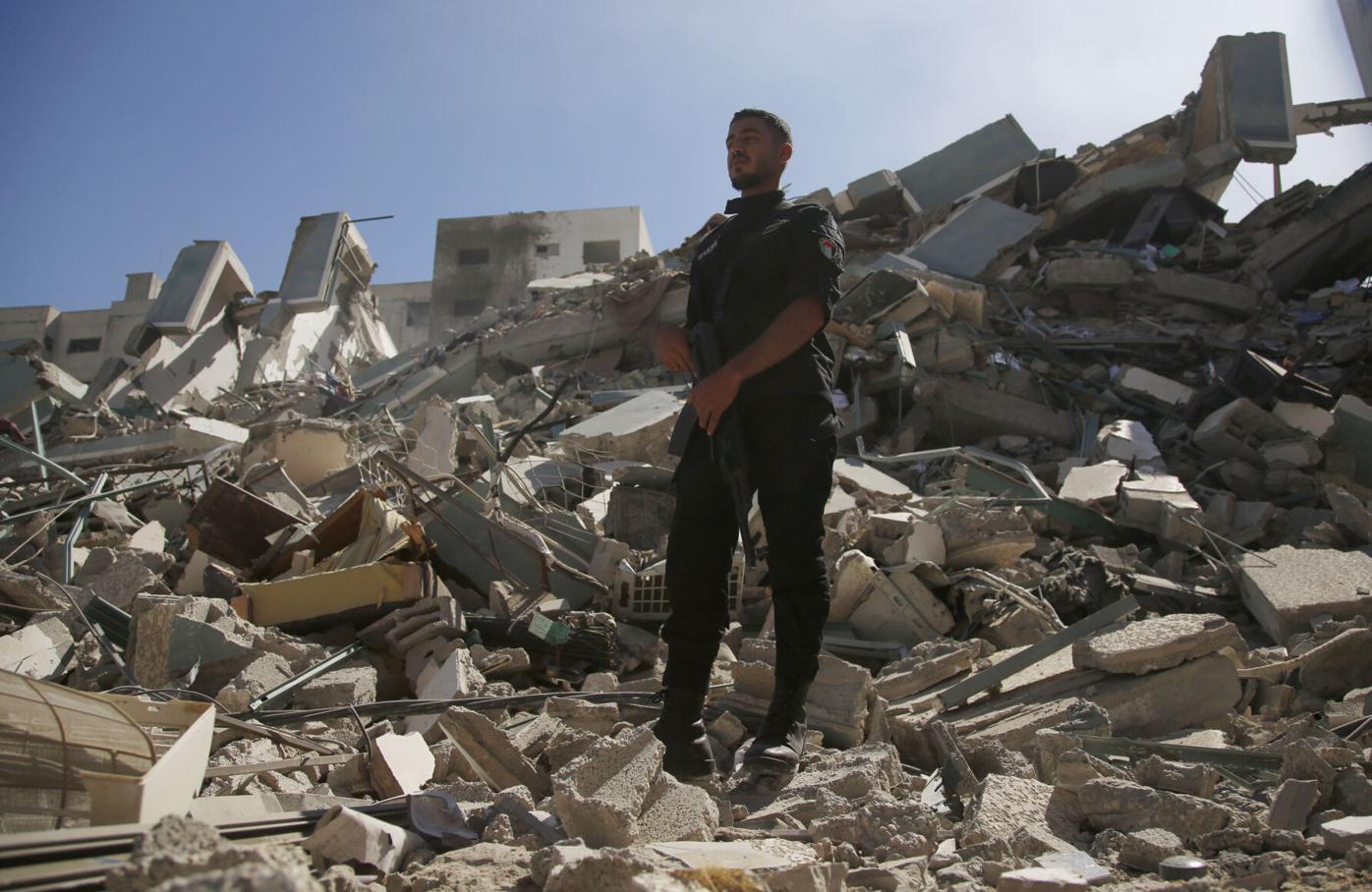 Israeli airstrikes on Gaza City flattened three buildings and killed at least 37 people Sunday, medics said, making it the deadliest single attack since heavy fighting broke out between Israel and the territory's militant Hamas rulers nearly a week ago.
A rescuer could be seen shouting into a hole in the rubble. “Can you hear me?” he called out. “Are you OK?” Minutes later, first responders managed to pull a survivor out and carried him off on an orange stretcher. The Gaza Health Ministry said 13 women and eight children were among those killed, with more than 50 people wounded, and rescue efforts are still underway.
Earlier, the Israeli military said it destroyed the home of Gaza’s top Hamas leader, Yahiyeh Sinwar, in a separate strike in the southern town of Khan Younis. It was the third such attack in the last two days on the homes of senior Hamas leaders, who have gone underground.
Israel appears to have stepped up strikes in recent days to inflict as much damage as possible on Hamas as international mediators try to broker a cease-fire. But targeting the group's leaders could hinder those efforts. A US diplomat is in the region to try to de-escalate tensions, and the UN Security Council is set to meet Sunday.
The latest outbreak of violence began in east Jerusalem last month, when Palestinian protests and clashes with police broke out in response to Israeli police tactics during Ramadan and the threatened eviction of dozens of Palestinian families by Jewish settlers. A focal point of clashes was the Al-Aqsa Mosque, a frequent flashpoint that is located on a hilltop compound that is revered by both Muslims and Jews. Hamas fired rockets toward Jerusalem late Monday, triggering the Israeli assault on Gaza.
The turmoil has also spilled over elsewhere, fueling protests in the occupied West Bank and stoking violence within Israel between its Jewish and Arab citizens, with clashes and vigilante attacks on people and property.
At least 181 Palestinians have been killed in Gaza, including 52 children and 31 women, with 1,225 wounded. Eight people in Israel have been killed, including a 5-year-old boy and a soldier.
The military said Sunday it struck Sinwar's home and that of his brother Muhammad, another senior Hamas member. On Saturday it destroyed the home of Khalil Al-Hayeh, a senior figure in Hamas’ political branch.
Hamas’ upper echelon has gone into hiding in Gaza, and it is unlikely any were at home at the time of the strikes. Hamas’ top leader, Ismail Haniyeh, divides his time between Turkey and Qatar, both of which provide political support to the group.
Hamas and the Islamic Jihad militant group have acknowledged 20 fighters killed since the fighting broke out Monday. Israel says the real number is far higher and has released the names and photos of two dozen alleged operatives it says were “eliminated.”
An Egyptian diplomat said Israel’s targeting of Hamas political leaders would complicate cease-fire efforts. The diplomat, who spoke on condition of anonymity to discuss the closed-door negotiations, said Cairo is working to broker an end to the fighting.
The Egyptian diplomat said the destruction of Hamas’ rocket capabilities would require a ground invasion that would “inflame the whole region.” Egypt, which made peace with Israel decades ago, has threatened to “suspend” cooperation in various fields, the official said, without elaborating.
Hamas and other militant groups have fired some 2,900 rockets into Israel. The military said 450 of the rockets had fallen short or misfired, while Israeli air defenses intercepted 1,150.
The interception rate appeared to have significantly dropped since the start of the conflict, when Israel said 90% were intercepted. The military did not immediately respond to a request for comment.
Israel has meanwhile carried out hundreds of airstrikes across impoverished Gaza, which is home to more than 2 million Palestinians and has been under an Israeli and Egyptian blockade since Hamas seized power from rival Palestinian forces in 2007.
Israel has leveled a number of Gaza City’s tallest office and residential buildings, alleging they contain Hamas military infrastructure. On Saturday, Israel bombed the 12-story al-Jalaa Building, where the office of The Associated Press was located. The building also housed the TV network Al-Jazeera and other media outlets, along with several floors of apartments. 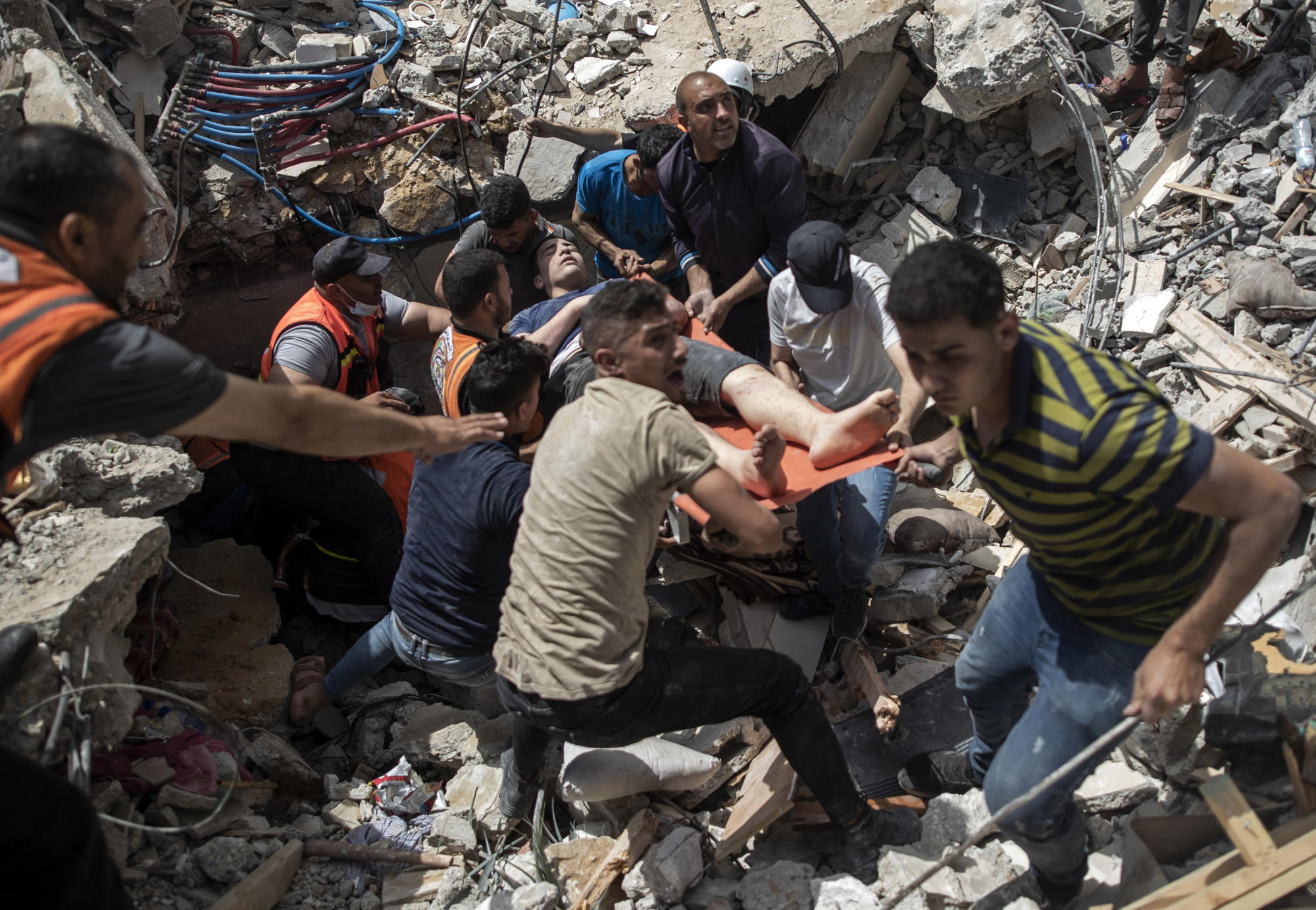 “The campaign will continue as long as it is required,” Israeli Prime Minister Benjamin Netanyahu said. He alleged that Hamas military intelligence was operating inside the building.
Israel routinely cites a Hamas presence as a reason for targeting certain locations in airstrikes, including residential buildings. The military also has accused the militant group of using journalists as human shields, but provided no evidence to back up the claims.
The AP has operated from the building for 15 years, including through three previous wars between Israel and Hamas. During those conflicts as well as the current one, the news agency’s cameras from its top floor office and roof terrace offered 24-hour live shots as militants’ rockets arched toward Israel and Israeli airstrikes hammered the city and its surroundings.
“We have had no indication Hamas was in the building or active in the building,” AP President and CEO Gary Pruitt said in a statement. “This is something we actively check to the best of our ability. We would never knowingly put our journalists at risk.”
In the afternoon, the military called the building’s owner and warned a strike would come within an hour. AP staffers and other occupants evacuated safely. Soon after, three missiles hit the building and destroyed it, bringing it crashing down in a giant cloud of dust.
“The world will know less about what is happening in Gaza because of what happened today,” Pruitt said. “We are shocked and horrified."
He said the AP was seeking information from the Israeli government and was engaged with the US State Department to learn more.
US Secretary of State Antony Blinken later spoke by phone with Pruitt, offering his support for independent journalists and media organizations, and the White House said it had communicated directly with Israel to urge safety for journalists.
The Biden administration has affirmed its support for Israel while working to de-escalate the crisis. US diplomat Hady Amr is in the region as part of efforts to broker a truce.