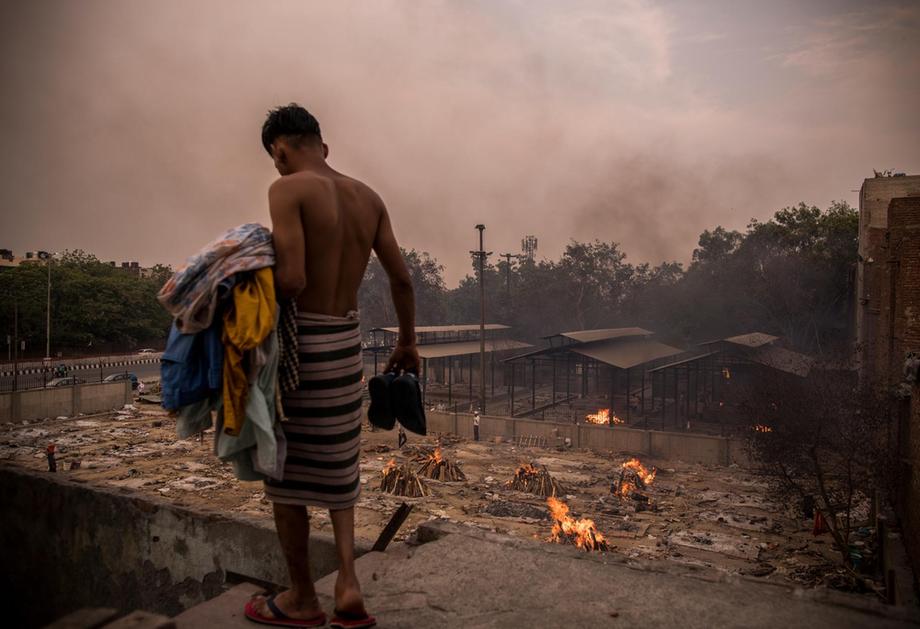 Dozens of decomposing bodies found floating in two rivers in northern India have raised fears that some victims of the country’s Covid-19 crisis are not being disposed of properly because of the sheer numbers of people dying each day.

Video footage of the Ganges river in Bihar state and the Yamuna in Uttar Pradesh showed dozens of bloated and decomposed corpses strewn in the water, raising concerns about fresh outbreaks of the disease away from the urban areas where most deaths have been reported so far.

Officials acknowledged there were at least 40 bodies at the two sites, although some media reports put the number of corpses at more than 150.

Aman Samir, the local magistrate in Bihar’s Buxar district, said authorities there were informed about the bodies at around noon on Monday.

“We investigated and found 35 bodies floating but these seem to have come from upstream and got stuck here,” Mr Samir mentioned that.

“We will conduct post mortems and then dispose of them,” he said.

Footage broadcast by news channels showed at least 10 bodies floating in the Yamuna in Hamirpur district in neighbouring Uttar Pradesh state. But local police claimed the number was much lower and that they were dumped in the river according to local customs and unlikely to be Covid-19 victims.

“Five bodies were found floating in the river. The locals in the area immerse bodies of elderly as they believe cremating the deceased will cause death in the family,” Narendra Kumar Singh, the top local police official, said that.

“The bodies may not be of Covid-19 victims as none were packed [in plastic covers],” Mr Singh said.

Although it has not yet been established whether the bodies in the latest videos are of Covid-19 victims, their numbers point to the pandemic that has killed thousands of people daily since a second wave of infections began tearing through large cities like New Delhi, Mumbai and Bangalore in March.

The disease is now believed to be raging through India’s vast hinterland, where awareness of the pandemic and health care are scarce. Many rural areas in Uttar Pradesh and Bihar have started reporting large numbers of Covid-19 cases.

The disease has claimed more than 70,000 lives in India since the beginning of April, out of more than 246,000 people who have died since the pandemic broke in the country last year.

India has been reporting more than 350,000 cases a day on average since the second wave began in March, and the daily death toll crossed 4,000 on several days, a world record.

It is a stark contrast from nearly two months ago, when daily infections had dropped below 9,000 life had largely returned to normal in the country of about 1.4 billion people.

Graveyards across the country are running out of space and crematoriums are burning more than one body at a time on funeral pyres. The overwhelming number of dead has created a shortage of firewood and forced crematoriums to use dried cow dung cakes and crop residue as fuel.

Critics have said the Prime Minister Narendra Modi’s government has downplayed the actual number of Covid-19 deaths and infections.

Newspapers have published page after page of obituaries and national media have reported extensively on discrepancies in official data as compared to the number of bodies cremated or buried every day across the country.

But the shocking videos of the bodies in rivers have raised more questions about the government’s data.

“They can fudge data but how will they hide the bodies. Still lots of skeletons will fall out of the cupboard in coming days,” Twitter user Abhimanyu Singh posted in a comment on the videos.

Mr Samir, the Buxar district magistrate, denied any mishandling of fatality figures and said the survival rate has increased in the area.

“We have adequate space in crematoriums and enough wood. We are also maintaining all records of deaths. We had 50-55 deaths a day but that decreased now. These seem to have come from Uttar Pradesh,” Mr Samir added.

Mr Modi is facing demands from opposition and medical experts to impose a nationwide lockdown on the lines of one his government announced last year to curb the spread of the virus.

Mr Modi has ruled out a nationwide lockdown, saying the step should be “the last option” to avoid affecting the economy and people’s livelihoods.

“Lockdown will break the chain of devastating spread. However, the central government had refused to heed, to implement lockdown,” the Indian Medical Association, India’s largest doctors association, said.