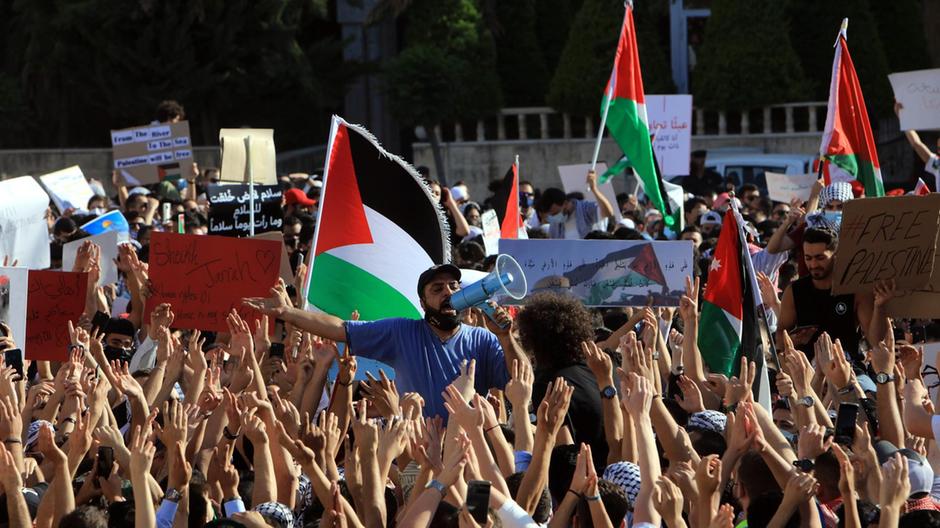 A mainly young crowd of 1,500 people in Amman on Tuesday denounced Israel over its crackdown in Jerusalem, as authorities sought to handle the possible effects of the escalation in Palestine on Jordan.

"Allah salutes Sheikh Jarrah. We die and Palestine remains,” some among the crowd of men and women chanted in the upper-end Rabieh district of the city.

Israeli eviction orders against Palestinian families in the Sheikh Jarrah neighbourhood of East Jerusalem sparked violence that turned deadly this week, and the threat of another war between Israel and militants in Gaza.

It also threatens a balance Jordan has maintained between established ties with Israel and catering to a population comprising many people of Palestinian origin.

The demonstration in Rabieh, near the Israeli embassy, is in line with a long-standing government approach to let people in Jordan vent their anger every time Israel raises pressure on the Palestinians.

Jordanian authorities allowed several anti-Israeli protests in Amman this week, despite a coronavirus ban on gatherings.

They cracked down on protests demanding the down fall of the government across Jordan in March. The protests followed the deaths of seven coronavirus patients at a public hospital that ran out of oxygen.

Security troops ring the crowds and have used armoured vehicles in Rabieh to block access to the Israeli embassy and surrounds.

“No peace, no embassy, no ambassador,” people chanted on Tuesday, in reference to the 1994 Wadi Araba peace treaty between Jordan and Israel.

Some chanted slogans glorifying the late Iraqi dictator Saddam Hussein, who fired ballistic missies on Israel during the Gulf War in 1990 to 1991.

Rashed, a Jordanian university student, said the reference to Saddam was anachronistic. He was wearing a black T-shirt with the word "Palestine" in while Arabic letters.

“Invoking Saddam does not serve the cause," said Rashed, whose family fled to Jordan from the Jenin Woods in the occupied West Bank in the 1960s.

A large proportion of Jordan’s 10 million inhabitants are refugees who fled their homes in Palestine in 1948 and 1967, and their descendants.

In the past few days, Palestinian outrage over the Sheikh Jarrah evictions ended in protests at Al Aqsa Mosque complex, one of the most important sites in Islam, and a crackdown by Israel.

The violence widened after Hamas attacked Israel with rockets and Israel struck Gaza . At least 35 people, mostly Palestinians, were killed.

Jordanian authorities regard Israeli pressure on the Palestinians in the past decade as a threat to Jordan's cohesion, as it could cause another mass migration of refugees.

Jordan's economy is in recession and the political system is partly tied to balances between tribes that underpin support for the monarchy.

The authorities have not made any move to downgrade relations with Israel over the eviction orders in Sheikh Jarrah.

But the kingdom has launched a diplomatic campaign to counter the Israeli moves in East Jerusalem, which the Palestinians, and Jordan, regard as indispensable to any future Palestinian state on land occupied by Israel in 1967.

The king set aside differences with Turkish President Recep Tayyip Erdogan to discuss the Jerusalem issue on Monday.

The two men agreed on the need to “continue to co-ordinate closely to put a limit to the Israeli aggression in East Jerusalem", the official Jordanian news agency said

The Israeli Supreme Court is due to hear a Palestinian appeal against the Sheikh Jarrah evictions in the next 30 days, after the state attorney general requested a hearing that was due on Monday be postponed.

At a meeting of the Arab League on Tuesday, Mr Al Safadi said that Israel would be committing a war crime if it evicted Palestinian families in Sheikh Jarrah.

Me said that the "Palestinian citizens in Sheikh Jarrah in occupied Jerusalem have a clear right to their homes."

"Depriving them from this right would be a war crime that the international community must stop," Mr Al Safadi said. "Israel is playing with fire.”

At least 15 dead in suicide bombing at Somalia army camp