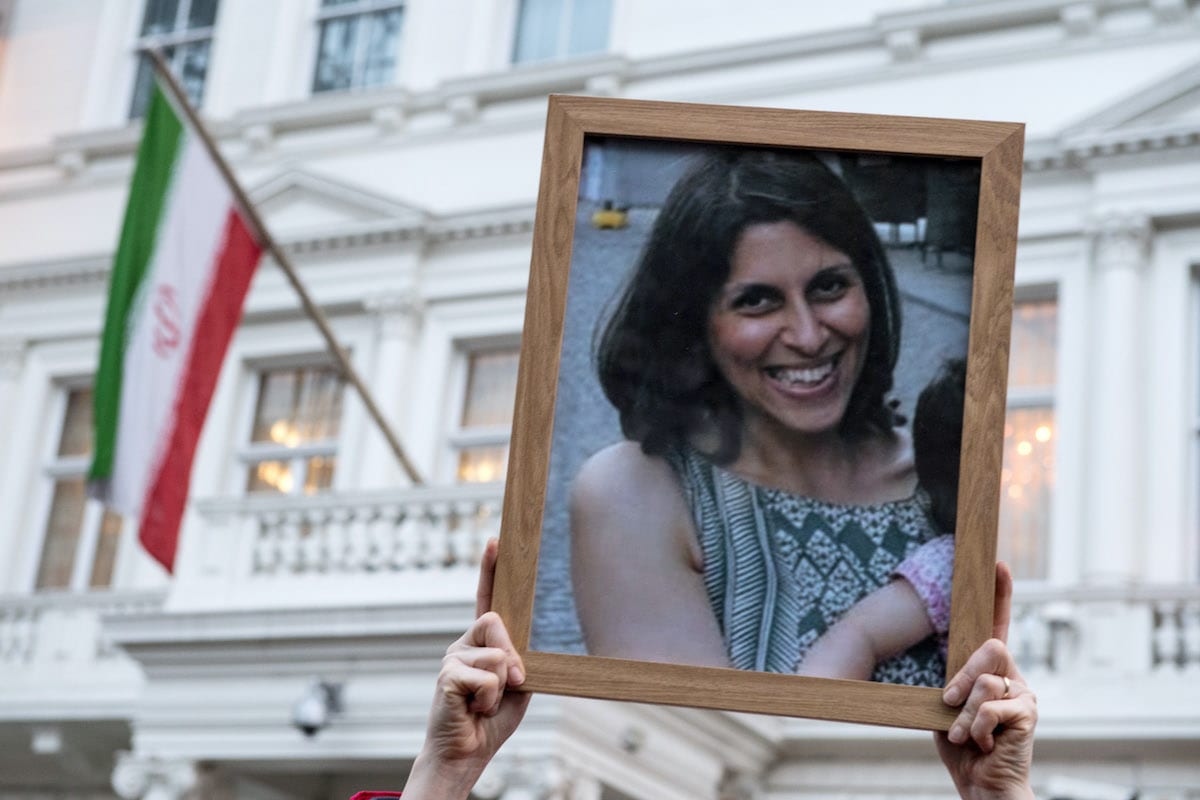 Iran’s treatment of detained dual national Nazanin Zaghari-Ratcliffe amounts to “torture,” Britain said on Sunday, after she was convicted anew and banned from leaving the Islamic republic.
“Nazanin is held unlawfully in my view as a matter of international law, I think she’s being treated in the most abusive, tortuous way,” Foreign Secretary Dominic Raab told BBC television.
“I think it amounts to torture the way she’s being treated, and there is a very clear, unequivocal obligation on the Iranians to release her,” he said.
The British-Iranian woman has been held in Iran since 2016. In late April, she was sentenced to a year’s imprisonment and banned from leaving the country for a further 12 months.
Her husband Richard Ratcliffe argues she is being held hostage as part of a diplomatic stratagem.
“I think it’s very difficult to argue against that characterization,” Raab said.
“It is clear that she is subjected to a cat and mouse game that the Iranians, or certainly part of the Iranian system, engage with and they try and use her for leverage on the UK.”
Richard Ratcliffe has linked his wife’s plight to a British debt dating back more than 40 years for army tanks paid for by the shah of Iran.
When the shah was ousted in the 1979 revolution, Britain refused to deliver the tanks to the new Islamic republic.

London admits it owes Iran several hundred million pounds, but is reportedly constrained by US sanctions in its ability to pay the debt back.
“That is not actually the thing that’s holding us up at the moment, it’s the wider context,” Raab said of the debt, pointing to nuclear talks currently ongoing with Iran and its upcoming presidential elections.
Zaghari-Ratcliffe, 42, had appeared in court last month to face new charges of “propaganda against the system,” a week after she finished a five-year sentence for plotting to overthrow the regime, accusations she strenuously denies.
Richard Ratcliffe said the family hoped she could at least serve any new sentence under house arrest, with her parents in Tehran. But the situation was “bleak,” he told AFP at the time.
Zaghari-Ratcliffe was initially detained while on holiday in Iran in 2016, when she was working as a project manager for the Thomson Reuters Foundation, the news agency and data firm’s philanthropic wing.
She has been under house arrest in recent months and had her ankle tag removed, giving her more freedom of movement and allowing her to visit other relatives in Tehran.
In March, legal campaign group Redress handed a report to the UK government which it said “confirms the severity of the ill-treatment that Nazanin has suffered.”
The organization said it “considers that Iran’s treatment of Nazanin constitutes torture.”
Iranian authorities have denied that Zaghari-Ratcliffe has been mistreated.