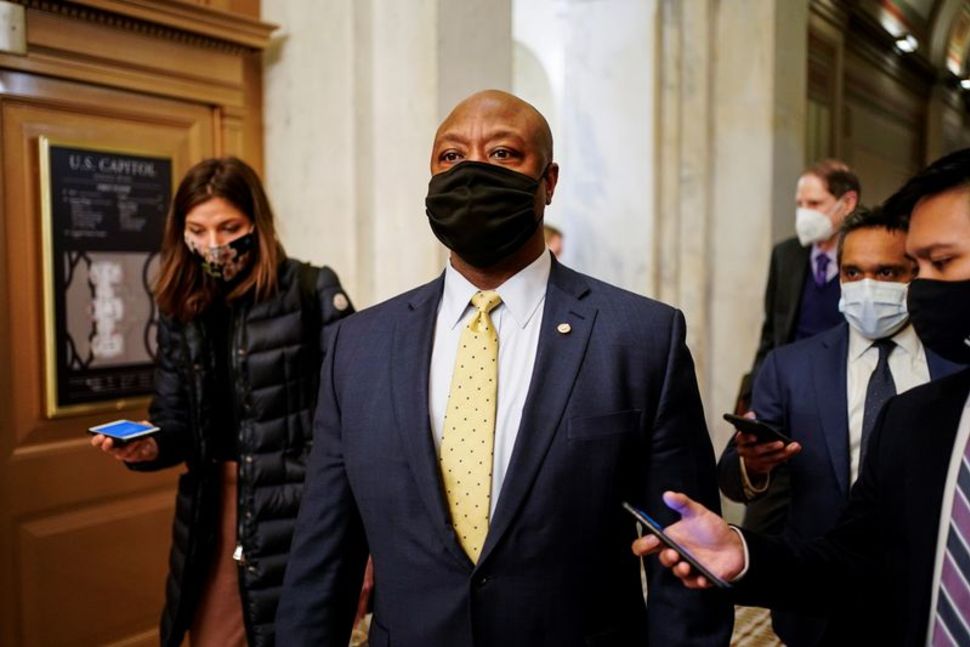 One day after a Minnesota jury convicted a former police officer for the murder of George Floyd, Republican U.S. Senator Tim Scott said on Wednesday he may be finished with drafting a proposal for a policing reform bill in the next week or two.

Scott introduced a policing bill last summer during global protests sparked by the death of Floyd, an African-American man whom white Minneapolis police officer Derek Chauvin killed by kneeling on his neck for more than nine minutes. That bill failed in the Senate after Democrats said it relied too much on incentives rather than mandating changes.

"I think we are on the verge of wrapping this up in the next week or two, depending on how quickly they respond to our suggestions," Scott told reporters.

Chauvin's conviction prompted new calls for action on police reform in Congress. The Democratic-led House of Representatives this year passed the George Floyd Justice in Policing Act, which aims to put a stop to aggressive law enforcement tactics but has not yet been considered by the Senate.

President Joe Biden plans to address police reform legislation in his first speech to a joint session of Congress next week, the White House said on Wednesday.

Scott said his proposal would make it easier for victims of police violence to sue police departments, rather than police officers.

Civilians currently face numerous legal barriers in trying to hold police departments or municipalities accountable for civil rights violations. According to Supreme Court precedent, they typically must show that official policies or certain customs were the "moving force" behind their injuries, or that the officer had been improperly trained. Courts often dismiss those claims citing an absence of evidence.

Scott said he was in talks with Democratic Senator Cory Booker and Democratic Representative Karen Bass, who introduced the George Floyd Act.

Booker confirmed there were talks, but repeatedly declined to characterize the discussions. "I am committed to meaningful police reform," he told reporters.

Bass also declined to give details about the talks, but told reporters in a Senate hallway: "There's a lot of room for discussion around qualified immunity ... We need the individual officers and the agencies to be accountable."

Bass said she hoped there would be a Senate bill by May 25.

Republican Senator Lindsey Graham told reporters he supported Scott's approach. "I think it's time to do it," he said, referring to policing reform.

The House passed Bass' bill last month along a party-line vote, but Republicans have criticized it because it strips police officers of qualified immunity.

The legal doctrine, meant to protect government employees from frivolous litigation, has become in recent years a shield in thousands of lawsuits that have sought to hold police officers accountable when they are accused of using excessive force.

Unions for police officers and sheriffs have both opposed the changes to qualified immunity made in the House bill.