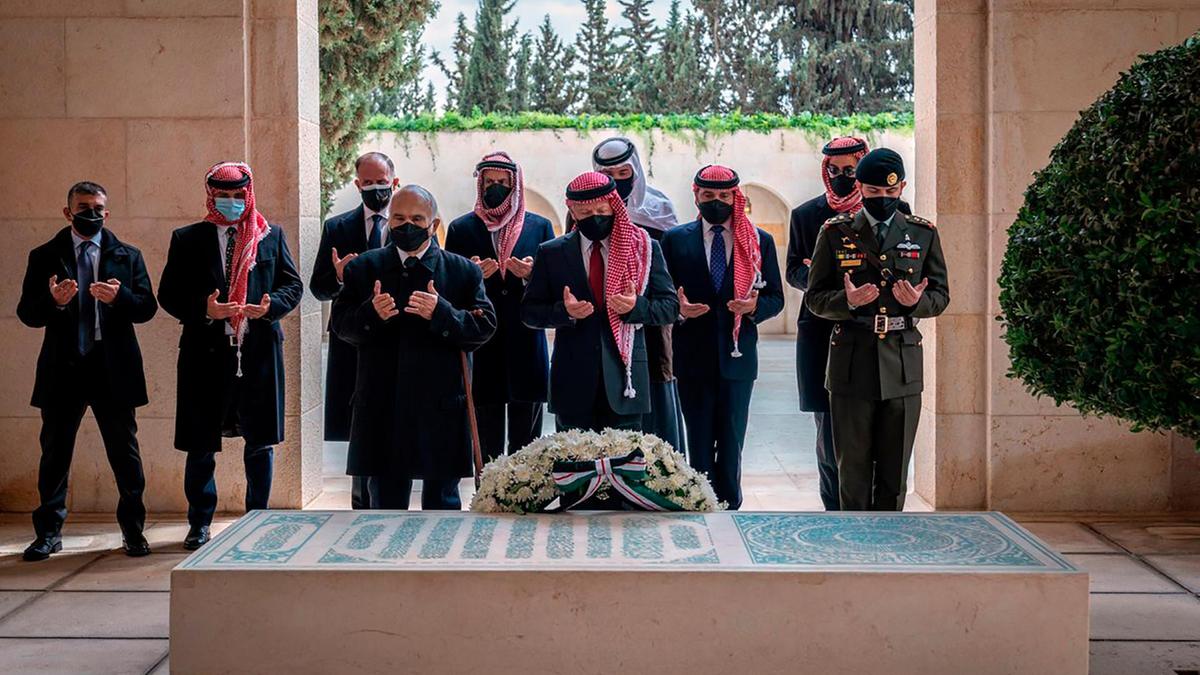 Jordan’s King Abdullah II marked the kingdom's centenary on Sunday with a public appearance alongside his half-brother Prince Hamzah bin Hussein, days after their uncle mediated an end to a rift between the two men that prompted international calls to preserve stability.

Photos published by state media showed King Abdullah and Prince Hamzah at the grave of their father King Hussein, along with their brothers and cousins. Between them stood Prince Hasan bin Talal, who last week oversaw the signing of a declaration in which Prince Hamzah reaffirmed his allegiance to the king.

King Abdullah said in a televised speech on Wednesday that strife in the kingdom country had been avoided. It came days after officials said 16 people linked to Prince Hamzah were arrested in a security operation. Prince Hamzah claimed he had been placed under house arrest.

Among those arrested were royal family member Sharif Hassan ben Zaid and the former chief of the royal court, Bassem Awadallah.

King Abdullah also laid a wreath at the tomb of the unknown soldier in Amman as part of the centenary events on Sunday.

A military band played requiem music as the king, accompanied by his son, Crown Prince Hussein, laid the wreath at the grounds of the Al Hussein Sports City.

The official news agency said the king recited a prayer for the “souls of the brave martyrs who had irrigated with their pure blood the earth of the homeland and the earth of Palestine”.

Modern Jordan originated as the British protectorate of Transjordan on April 11, 2021, after the Arab Revolt against the Ottoman Empire in 1916. The revolt was led by Sharif Hussein of Mecca and his four sons, one of whom, Abdullah I, was Jordan’s first Hashemite monarch.

Sheikh Mohammed bin Rashid, Vice President and Ruler of Dubai, and Sheikh Mohamed bin Zayed, Crown Prince of Abu Dhabi and Deputy Supreme Commander of the Armed Forces, stressed the depth of the UAE's ties with Jordan in messages of congratulations posted on Twitter on Saturday.

"Jordan has love for the people of the Emirates and its leaders since the founding of the state," Sheikh Mohammed wrote in a tweet accompanied by a video showing Sheikh Zayed, the Founding Father, receiving King Hussein, as well as visits to the Emirates by his son and successor, King Abdullah II.